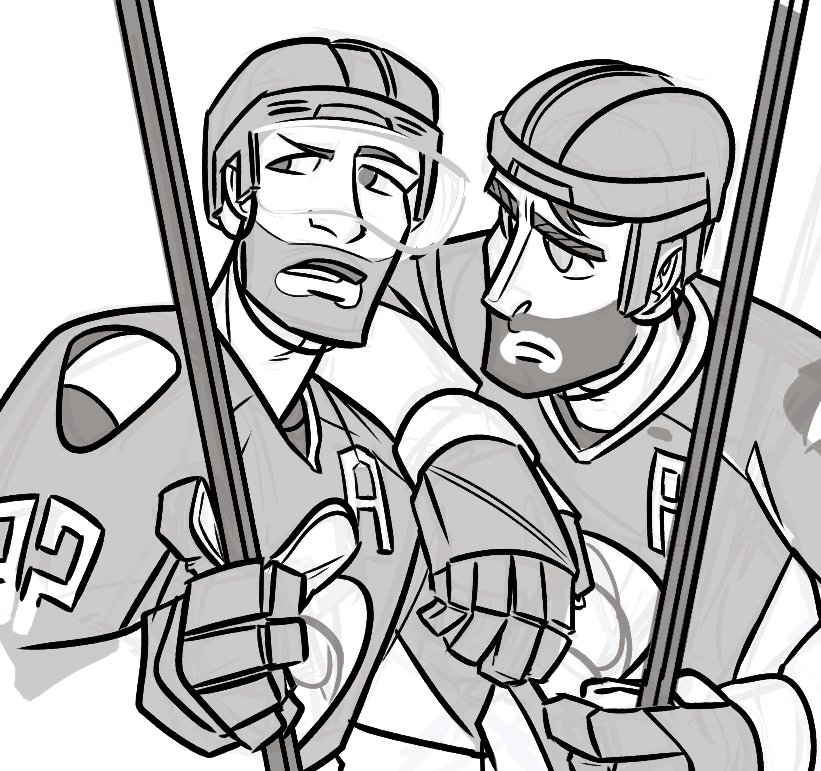 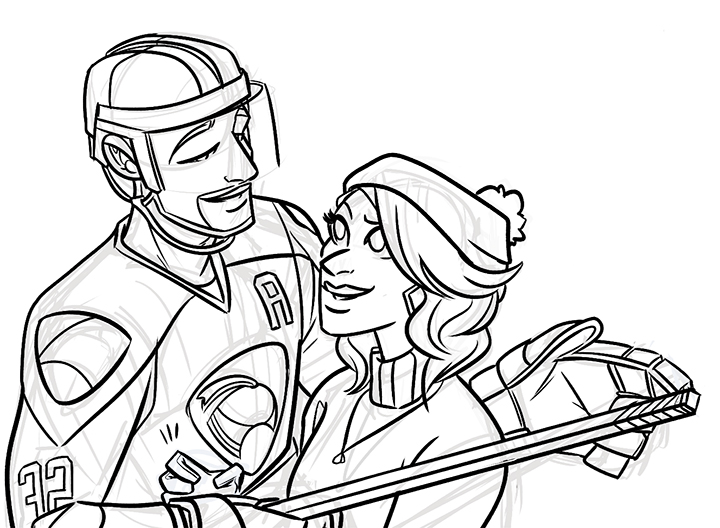 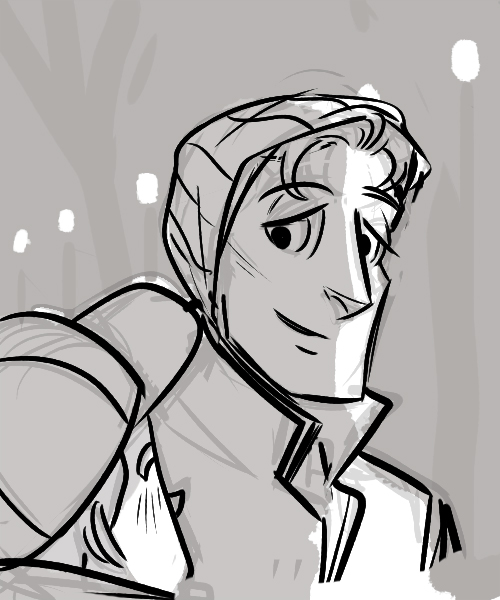 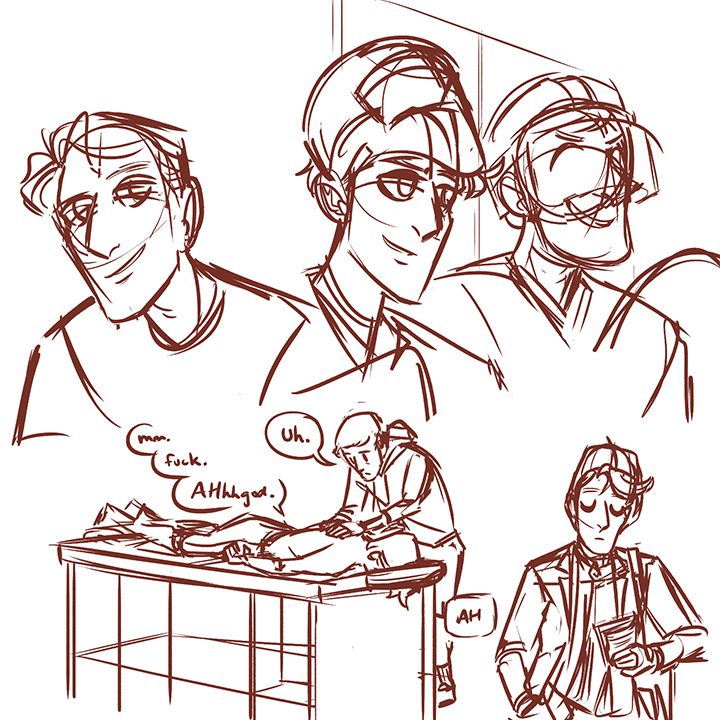 - More sketches. Exploring some ideas/characters, though I’m not sure how much of this will even end up in the comic. But, I wanted share.

- I’ve never shown the front of Thirdy and Marty’s uniforms in the comics! They’ve been alternate captains this entire time, though. Marty got the A before Thirdy did, but Marty’s been on the Falcs slightly longer and is slightly older. Marty’s 35 and Thirdy’s 34. (Tater: haha old guys.)

- Every season, Marty says he’s going to start wearing a visor, but you know hockey players and their superstitions. (”It’s, uh, a bit of a point of contention between me and Gabby. I know, I know, safety safety. Ya know my grandpa played in a league where they didn’t even have to wear helmets?”) With Thirdy, however, long story short–he got married. His wife carefully curated several articles worth of convincing players safety research. Then, she presented them matter-of-factly. The tenuous excuses of “superstitions” and “I’ve never been hit before” and “well if ya get a stick to the eyeball were you even paying attention” really couldn’t hold up against the data. 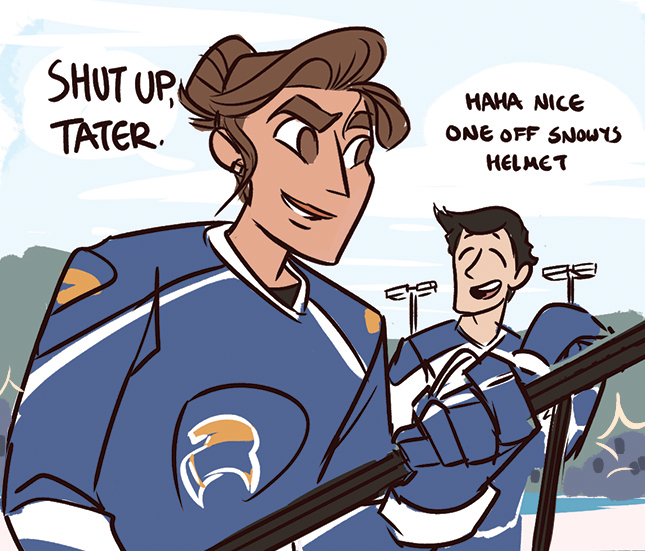 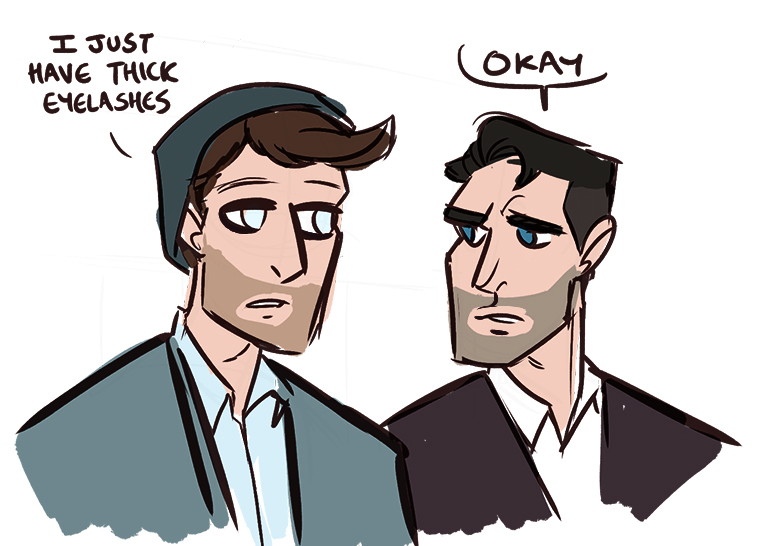 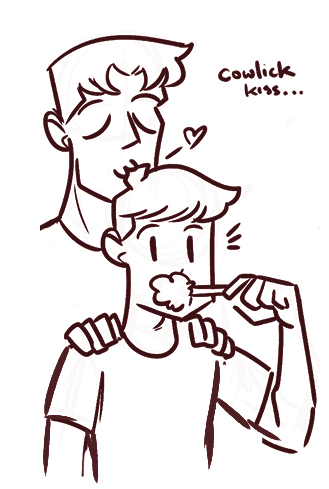 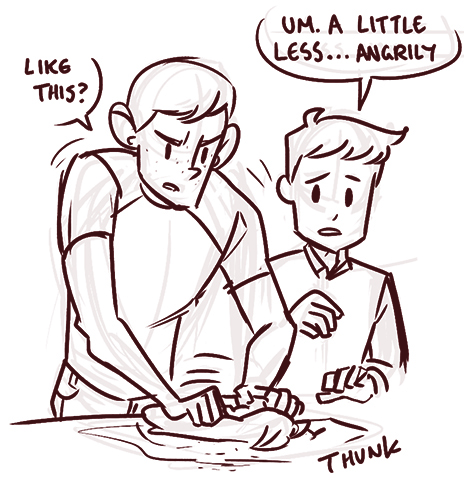 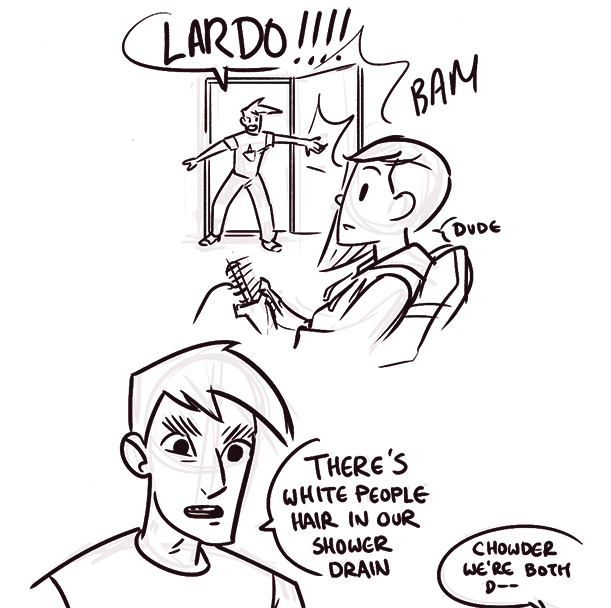 From a recent sketch jam. I hope something can make you smile today. 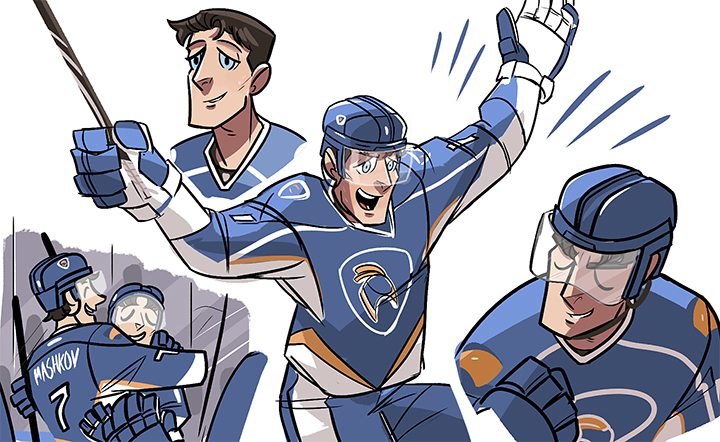 Justin Oluransi: [shared a link with the chat]

Adam Birkholtz: P. sure the guy doing Jack’s cellys is different from the dude who does the post games.

Shitty Knight: ahhhh yes; that jack reminds me of the mf who leaf piled me a few weeks ago 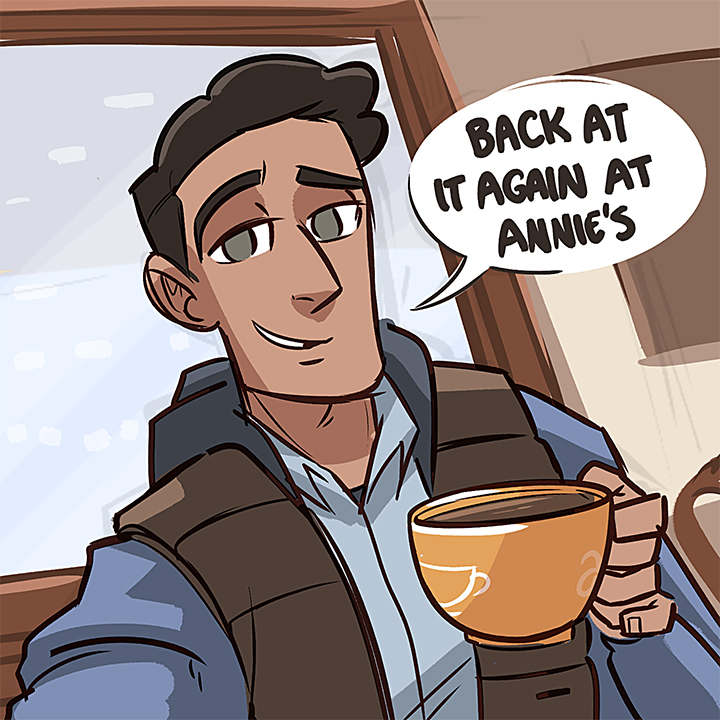 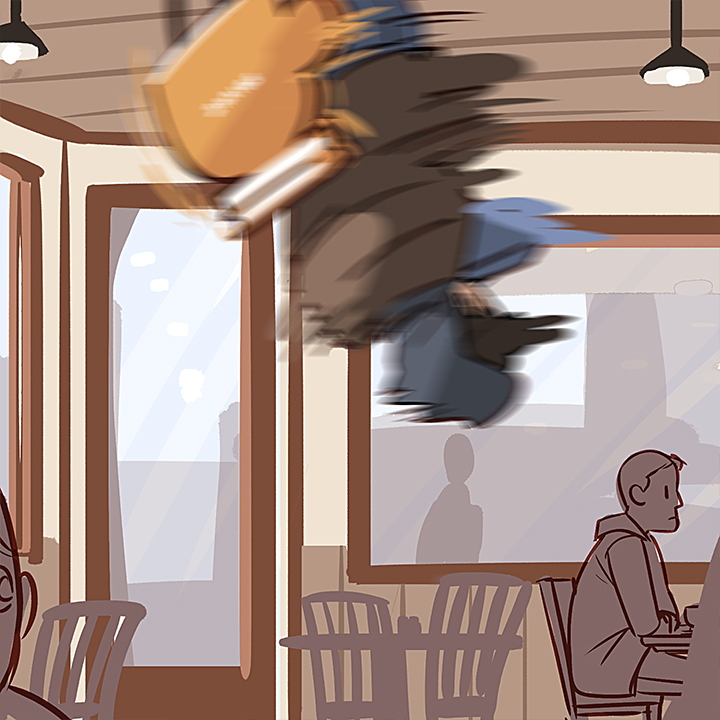 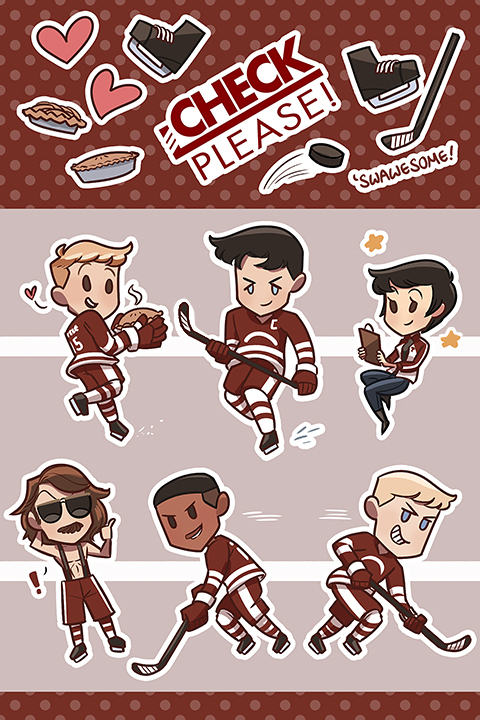 A stretch goal extra for the Kickstarter–a sticker sheet! â˜† 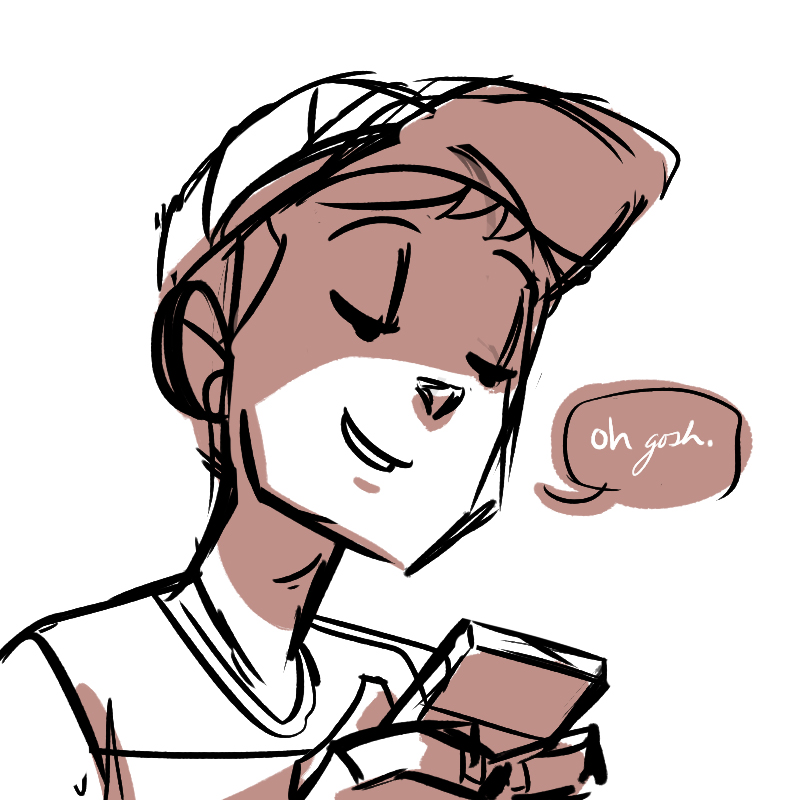 (Yet another sketch I never posted here!) 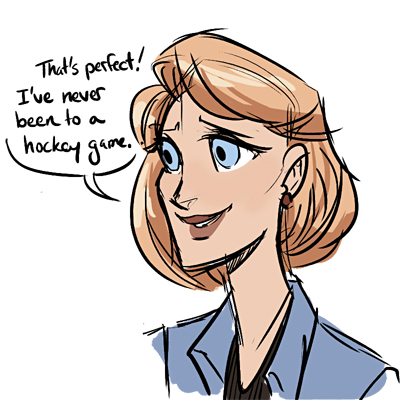 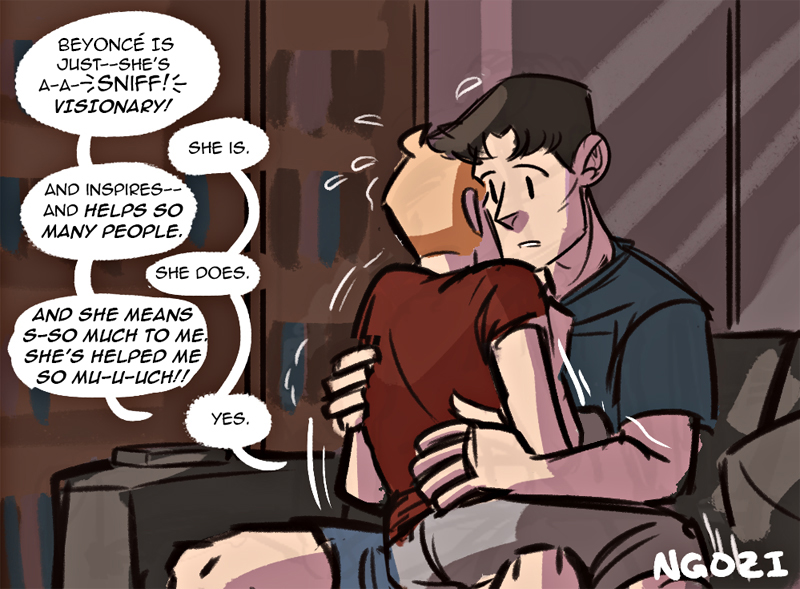 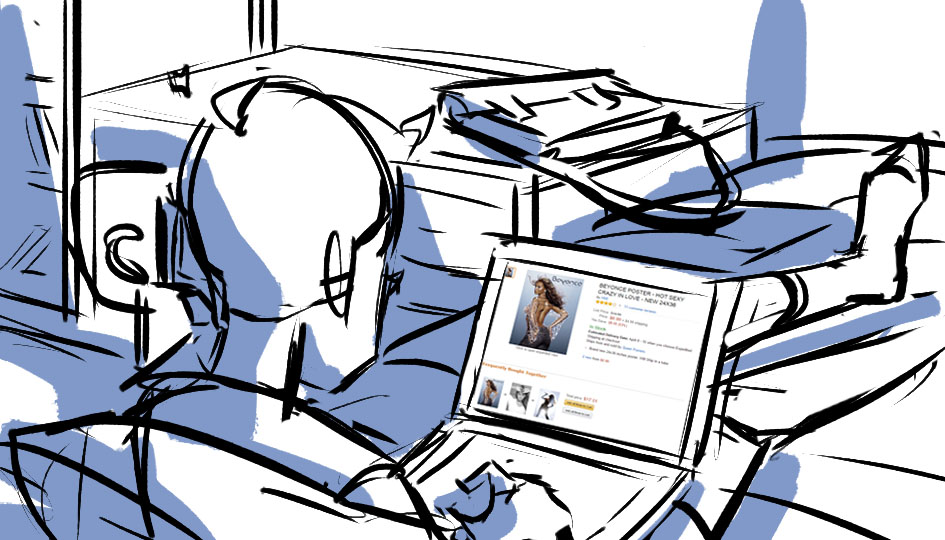 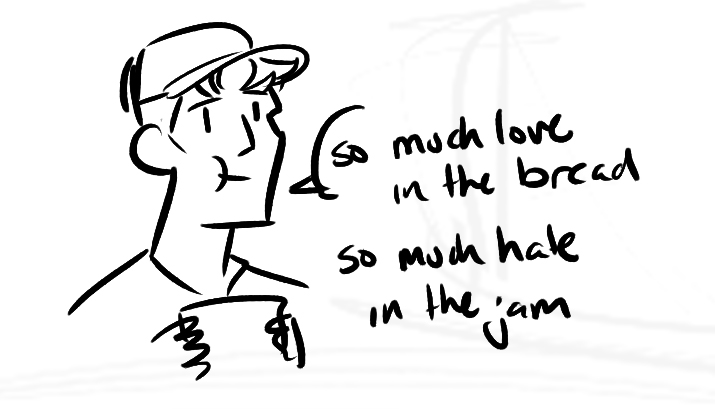 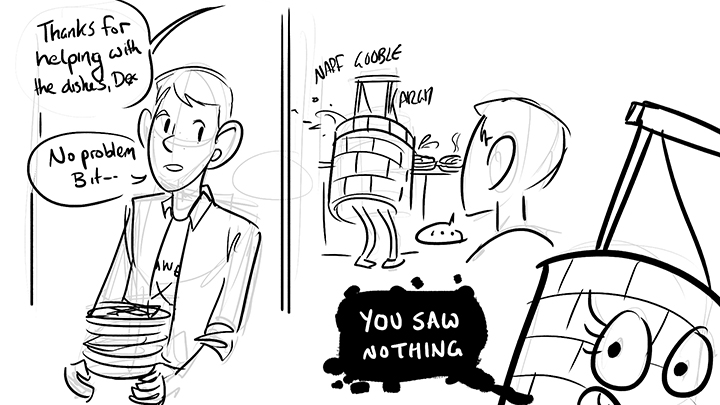 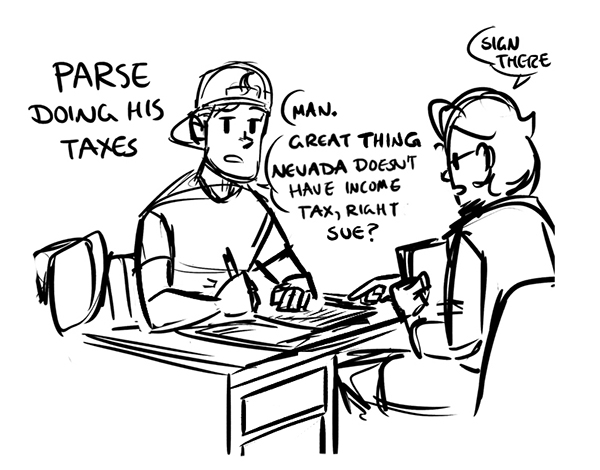 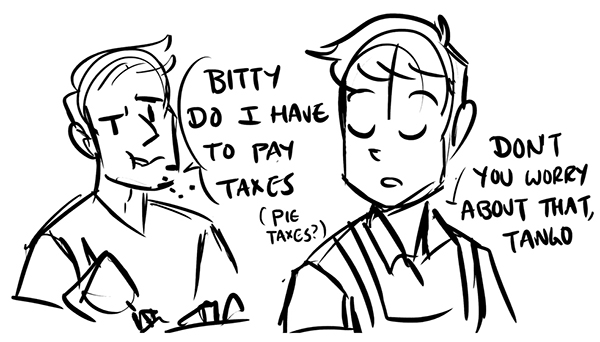 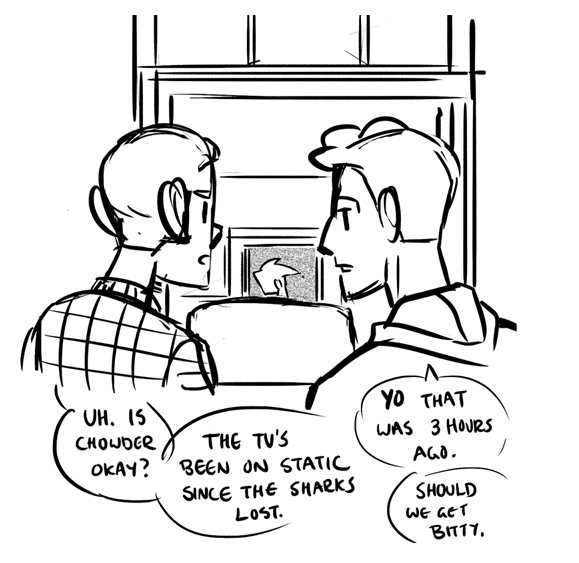 And a sketch dump! 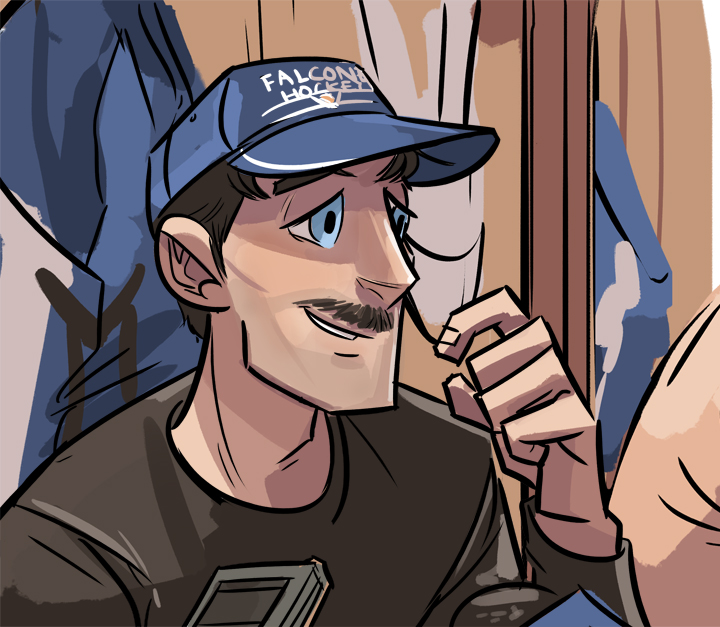 Bitty paused and sat up straight, staring at the picture. “…Now, I can’t say I’m a fan,” he started carefully. “But I know it’s for a good cause and that’s what’s most important.” 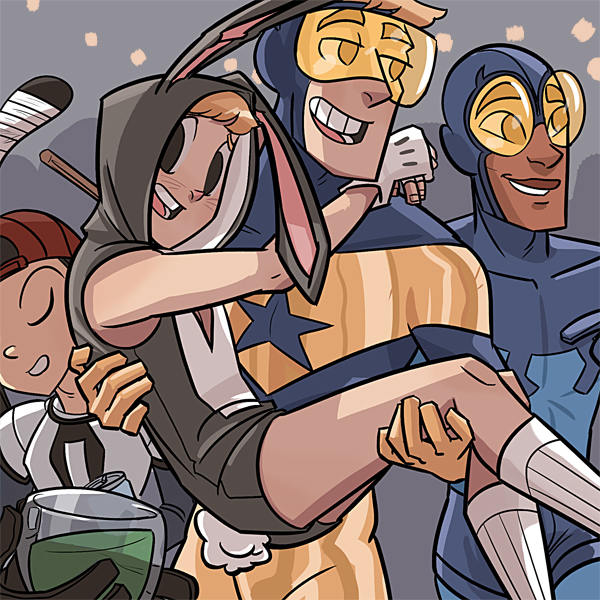 Johnson: There’s an infinite number of things going on here.

An oldie but a goodie:

ME: I wanted you to be the first to see my costume!

ME: But Tango just barged in, haha.

ME: [sent a photo to Jack. L. Zimmermann]

ME: I just thought it’d be cute. 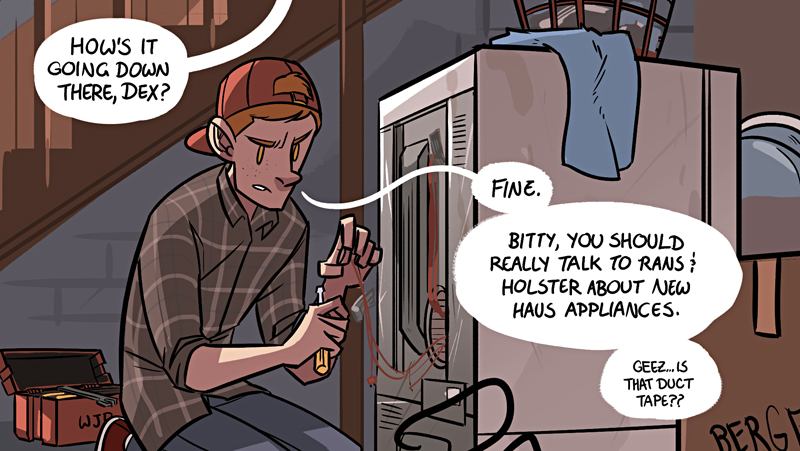 Bitty set the slice of pie down on the kitchen table and patted Dex’s shoulder. “Thank you so much, Dex! Everyone’s been avoiding laundry for weeks and–how do I put this–it’s starting to affect the general ambiance.”

“Why do you fix stuff if you hate it so much?” asked Nursey. He was loitering around the freshly cut pumpkin pie sitting on the counter.

Dex dug into his slice and frowned. “Because when something’s broken you fix it. Also? I don’t hate it.”

“Well…You did have a pretty big scowl on your face when you came up the stairs,” offered Bitty gently.

Dex shrugged. “I was actually very happy I got the dryer to work. I guess I was confused as to how I got it to work. It’s so beat up. Like, did you guys use to throw kegsters in the basement?”

“It’s okay if it’s for Dibs, Poindexter,” said Nursey. Somehow he had procured a pie slice.

But he was already out in the foyer. “I mean, seriously, we all do stuff for Dibs. Thanks, Bitty!”