Yes, but no where near as goofy and more boyish? With frequent lapses into hair salon levels of sassiness.

People seem to be curious about this so:

Bitty - Bitty has a Georgian accent that inevitably gets more country when he’s drunk. He can sing okay, but he mostly likes to sing in a quiet falsetto to Beyoncé while he’s baking. So maybe Jack McBrayer, but barely.  I’d actually say closer to this girl. Tenor. A lilting southern belle.

Ransom-  I’m Nigerian, so I definitely know that if I heard Ransom talk I’d be able to tell he was Nigerian. Which may not make any sense, but there’s this weird quality you get growing up? But Ransom sounds like every hockey kid from Toronto, so imagine Wayne Simmonds? He can sing very well too, which Holster thinks is pretty great. Baritone. Bubbly lacrosse bro.

Holster - Holster basically has the same speech patterns as Cliff from Cheers, but with everything taken down an octave and a tiny bit slower. (So perhaps closer to Hamm from Toy Story 2)  Holster is also super loud. (He can’t help it; he projects.) Holster sings very well because he also knows how to play piano! And he’s one of those dicks who always tells people when they’re sharp or flat. (I swear I’m going to make an extra about this.) Bass. If the mailman from Cheers was 6'4" and played hockey and was a fucking bro.

ETA: I’m pretty sure Holster can do a spot-on Patrick Star impression and Ransom can do a decent Spongebob and this is 10% of the reason why they can’t sit next to each other in formal settings. “Pst. Hey. Hey, Rans. Is may-on-naise an instrument?”

Jack -  Jack sounds like 40% Claude Giroux and 60% Sidney Crosby? If that makes sense. A standard Canadian accent but close to Kris Letang’s (from 1/5/14). Guy has a slight French-Canadian accent. He can bro-out his accent when he needs to, but after winter break, Jack comes back to Samwell sounding a bit like a foreign exchange student from speaking French so much at home. Jack can carry a tune. Baritone. French-Canadian hockey player being interviewed after losing a game.

Shitty - ??? But Shitty sounds sorta like this one guy from my Spring Break camping trip junior year of college. That’s it, sorry, I got nothing. Shitty is not allowed to sing. The boy is tone deaf. Oh God. Tenor. ???

intellectual-carrot replied to your post: Comic 13: The Closet Story (Part 1)

I just want to tell you how much I love your backgrounds - they are so interesting and full, the time you take on them is really evident (and appreciated)

Thank you!! I’ve said it before, but I like the idea of places as characters, so environments are a big part of storytelling for me.

When it comes to places that characters inhabit often, defining a place helps us believe that characters have attachment to that place. Like imagine Ransom and Holster looking up at Faber’s windows at their final home game. Or Shitty graduating, walking out the Haus for the last time, and giving up his Haus key to some loser sophomore. Or in a less horribly nostalgic vein, if there were ever another scene where Jack and Bitty are having a Heart-to-Heart at the loading docks behind Faber, we as the audience–as well as Jack and Bitty–go into it with a ton of associations because of what we’ve seen happen there before. If we create places and define them, they can become abstract concepts that have equal impact on both the reader and the characters! Isn’t that neat? (I can go on about this for a while. I mean, Finn and Jake’s tree house is a great example of this, as well as Central Perk from Friends. (The Great Hall of Hogwarts–the list goes on.))

So though I love drawing characters, floating heads, and writing witty Shitticisms, I could draw backgrounds all day. But if CP! turned into just pictures of the Haus in different decades I think people might get a little angry. ¯\_(ãƒ„)_/¯ (Wouldn’t you want to see it back when it was the Theta Alpha Theta sorority house?)

TL;DR - I think about backgrounds just as much as I think about…IDK, Jack’s Rich White Boy Angst or whatever the hell this story’s about. 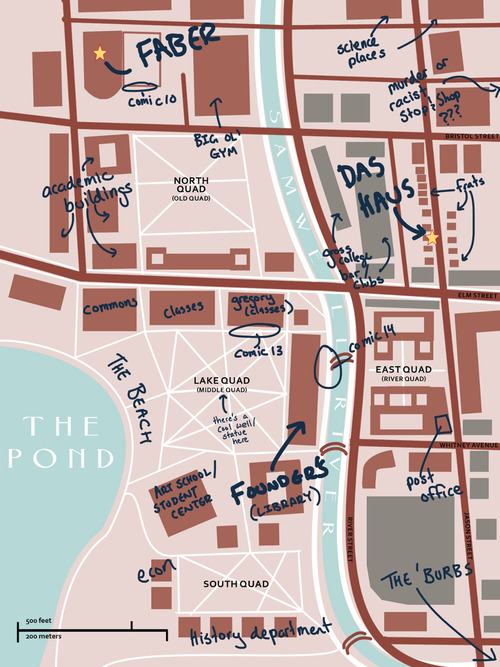 ETA: This is just central campus. There’s more north that’s not shown. (Mostly because I don’t know what’s up there. Dragons? idgaf.)

tarastarr1 replied to your post “What grades are the guys in? I would hope none of them are graduating soon..”

Can I ask why the age distribution? Did some of the guys not go right to college after high school?

Great question!! A lot of guys who want to play hockey professionally usually join junior leagues after graduating from high school or while they’re in their final years of high school. Holster was in the USHL for a bit before enrolling in Samwell, while Jack played in the QMJHL before taking some time off and then enrolling. The rest of boys just enrolled in Samwell right after high school. (So yeah, Holster’s older than Shitty!)

BUT if anyone’s interested in Jack’s life and why he’s literally a grumpy old man playing with youngins, here’s a timeline:

In Comic 6, I never explained all of this as precisely, but that’s the gist of it. Jack was on a fast track to being the next poster boy for the NHL but his life got derailed and now he’s at Samwell trying to redeem himself.

Also, what should the Boys be for Halloween? I’ve tried nothing and I’m all out of ideas.

But Ransom’s a sexy MD got that covered.

But it’s college so there’s about 5 days of partying and dressing up.

You have captured the essence of my mother and I am both delighted and horrified and laughing and experiencing a ridiculous amount of second hand embarrassment for Bitty. Also would that Madison be Madison, GA?

Bitty’s a small town boy! And the rest of the guys are really from the suburbs–I’m pretty sure Shitty grew up in Brookline.

NO YOU ARE AMAZING THANKS FOR READING

Yeah, man, I still can’t decide whether Bitty would be excited about the mullet? In a “yay let’s do stuff to my hair this reminds me of skating competition mornings in the dressing room” way? Or if he absolutely hates it in a “I have three cousins on my mother’s side with mullets. They live in a place called Buttermilk, Georgia and none of them have more teeth than they have fingers”…way.

Holster clearly hates his beard but then again his default expression is a slightly annoyed indifference, so who knows. Maybe he’s just pissed because Ransom probably puts crap in it while he’s sleeping.

And I’m sure Jack’s lack of beardage is something that keeps him up at night. “Why can’t I grow a beard I’m 23 my father could grow a beard when he was 23 My father won a Stanley Cup when he was 23. I am a failure.” Whomp whooomp.

These are things I think about.