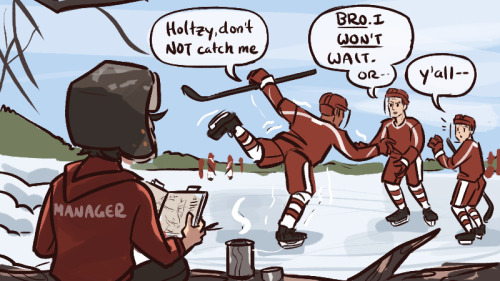 The Check, Please! Year One Kickstarter launches in less than two weeks. (On April 20th to be exact.) And WOW. I hope you guys like month long Internet festivities.

âœ“Aaaaahhhh yes. Here we are. Another blog post where I’ll answer questions you probably weren’t even thinking about and I’ll make numerous vague hintings at things relating to the plot. Why do you read these???? Do you want me to say Jack is going to kiss Bitty? Because I technically just did.

âœ“ What is a “shinny”? Shinny aka pond hockey is when you play hockey outside! I wish I could have conveyed how large the Pond actually is, because they only cleared out a very small section of it for the hockey team. (Have you seen the Check, Please! Wiki? It’s amazing and sweats I use it all the time.)

âœ“ WHAT how did Bitty get that high off the ground with that jump??? Bitty is a cartoon character.

âœ“ But in hockey skates! It can be done.

âœ“ Bitty is real and I’m going to go to Samwell University. ….Okay, man. The application fee is $100 and you can paypal that to me directly, thanks. No essays.

âœ“ What’s Jack doing? Jack’s taping his stick. It’s something hockey players do to prolong the life of a stick and is often incorporated into a player’s pregame superstitions. Stick tape comes in all sorts of colors and designs with the most popular tape colors being black and white–I usually color tape white to create visual contrast in a panel.

âœ“Bitty’s Twitter is MY FAVE BUT I’m scared that I’ll know what will happen in the comic and I won’t enjoy the comics! hey hey hey and it’s okay if you don’t believe me–but Bitty’s tweets and the comics I have planned are very different. (R-r-remember epikegster?) Will you get spoiled? Meh? A little? I mean, it’s almost like reading the episode titles for a TV show–you may know what happens, but you may not be able to guess how. If this level of spoilage leaves enough of a bad taste in your mouth, then the experimental asynchronous multiplatform social media experience that is Eric Bittle’s Twitter account is something you may not want to partake in…join me in looking up from your computer or phone screen. Take a deep breath. We’re all gonna be okay.

âœ“ Anyway! While I hope the concept of Bitty’s Twitter doesn’t keep anyone up at night, it might relieve you to know that he’ll probably stop tweeting over the summer, as the story pauses.  Maybe the comic will catch up? ¯_(ãƒ„)_/¯ Hah, it’s going to be fun either way.

âœ“  Hello, I’m a completely different reader–I hate Bitty’s Twitter but I want to buy things from you!! Oh hey!!! I’m doing a Kickstarter in a few days!

I’m going to try to get one more comic out before then! *takes your hand* please be patient.

First, thank you so much for the feedback on the zines! I’ll be sure to let you know when they go on sale via twitter, facebook, & tumblr in a week(?) or so. (I’m going to try to accommodate everyone! ._. Gonna have to write so many thank you notes. *sweats* It’s my fault I love nice packaging and customer service.)

In the meantime, during this calm before the storm of Kent “Yes I did eat fruit loops out of the Stanley Cup” Parson, I’ll answer about a dozen or so questions concerning the comic! Shoot. Thanks, guys! I’ll work on answering these!! 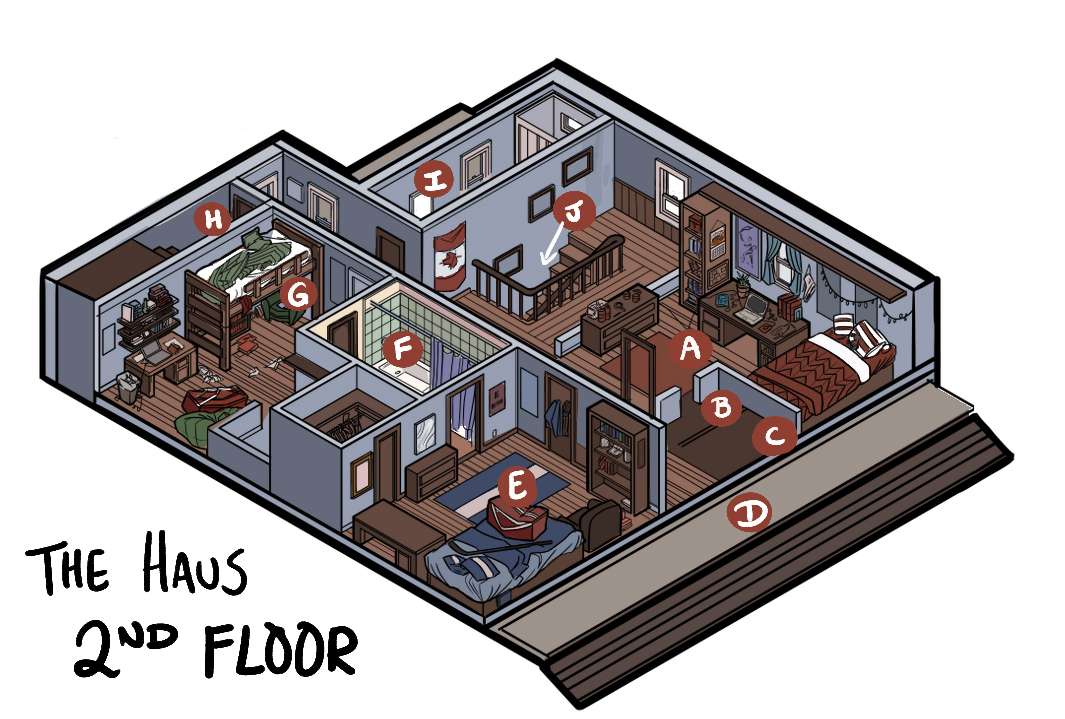 H - Stairs to the attic

Each of their rooms definitely has more stuff (like chairs! random clothes!–I may do a more detailed diagram of both floors). I drew this before I had the design of Bitty’s room finalized, so you can see that he actually sleeps with his pillows on the other side of his bed so Señor Bunny can make cameos on hisvlog.

You can see that Comic 1.22 - Goodbye for the Summer took place in the hallway. (See the convenient Canadian flag from the “eat more protein” panel?)

In Comic 2.1 - Moved In, it seems as though Bitty is taking a shower in Jack and Shitty’s bathroom–which would probably give extra explanation to Jack’s annoyance. That’s actually a mistake? I totally forgot that the shower in Bitty, Ransom, and Holster’s bathroom doesn’t have a curtain–but you know, maybe now that mistake is just canon.

Anytime Bitty tweets about Shitty being on the roof, he’s referring to the unofficial Samwell Men’s Hockey Reading Room–which is basically a lawn chair on the roof over the porch. Which you first see alllllll the way back in Comic 1.4 - The Haus and then again in Comic 1.22 - Goodbye for the Summer.

Shitty and Jack’s rooms are connected which is an important part of their friendship.

GREETINGS everyone! WOW, what a week we’ve had here at Swawesome Santa HQ! The fic and the art have been pouring in, and we’ve made this handy round-up post for your browsing convenience. Just a reminder about Power Play (PP!)— if a fan work inspires you to create something more, please go for it! Tag it “swawesome santa”! We’ll reblog it! Everyone wins!

Enjoy all the gifts!

Just in case you didn’t know, there’s a Check, Please! fanworks exchange going on. Right now. Like right-right now. And you should totally follow the blog and read the fic and look at all the art!

BUT WAIT THERE’S MORE THIS IS ONLY THE FIRST WEEK. And THERE’S STILL MORE WORKS TO COME! That feeling flooding your brain right now? That’s happy neurotransmitters flying all around your synapses like ‘swawesome?!

Thank you again to northerndownpour and mamaliza for organizing this!

wait can we talk about Jack's former long hair as evidenced by his old ID photo? 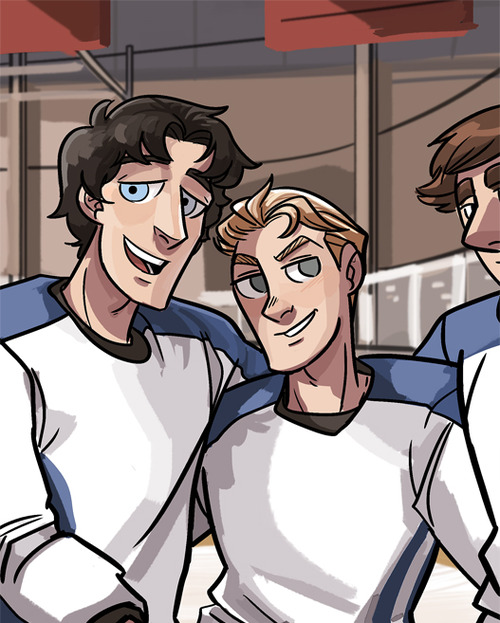 Jack back in the Q.

He presumably got a haircut before The-Draft-That-Didn’t-Happen, but after that, during his time away from hockey (presumably coaching a peewee hockey team) he let it grow and didn’t really get a haircut until after his Samwell Photo ID was taken:

I don’t know how closely you follow Yuletide, but here’s the signup summary for this year’s challenge - the red is how many people requested a fandom, and the green is how many offered to write it.

In addition to the fic exchange? …the holidays are going to be ‘swawesome. 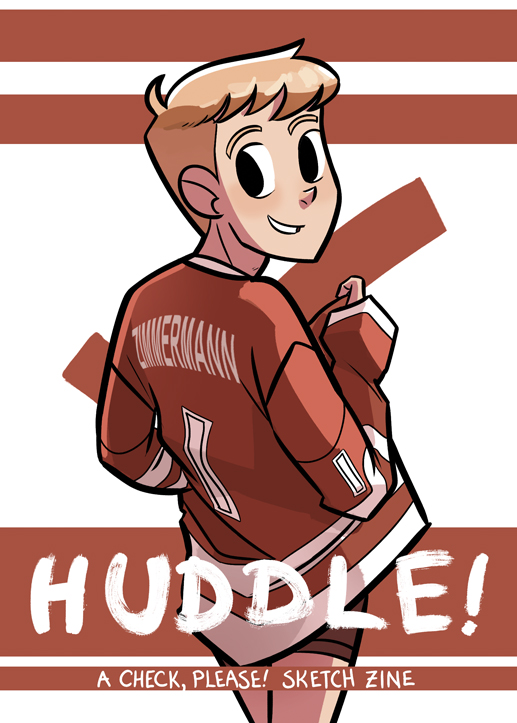 Here’s another thing I’ll be selling at Anime Weekend Atlanta! (Table C-10! Come say hi and get BUTTONS TOO.)

Huddle! is ~20 pages of shippy, never-before-seen sketchbook drawings from me, @robochai,and @classystaches. I even threw in 1000 words of PG- to R-rated drabbles that have been sitting on my laptop for ages! But yeah don’t let the cover fool you, it’s not a colored comic–it’s a b&w zine.

Okay, I got this idea at like 5AM and it's kept me awake so it needs to be down so my mind can calm it. Was Jack one of those chubby kids that didn't get hot until after high school and that's why he's still awkward? Because he's trying to figure out how to be hot!Jack and not awkward shy fat!Jack and it's not really working. (Soz Jack. I love you.)

Jack Zimmermann was one of those chubby kids but then puberty hit him like a brick wall and then EVERYONE GOT REALLY CONFUSED.

Jack’s dad was a professional hockey player and Jack’s mom was an actress/model. (More on this later!)  So when Jack came out of the womb and looked...well...

But then he got his dad’s ass and his mother’s cheekbones and the entire nation of Canada breathed a sigh of relief.

Guess who got his hair did.

ive been wondering bc im not sure if it's obvious or not but i've been wondering where samwell is supposed to be :0 like i figured it's a fictional place (or is it??) but is it in canada or north usa or have you not really thought about it? :> this ask is a mess so i'll end it now i hope you're having a lovely day

Hey! The about page has Samwell University located in Samwell Massachusetts, USA!

But here’s a map for reference: 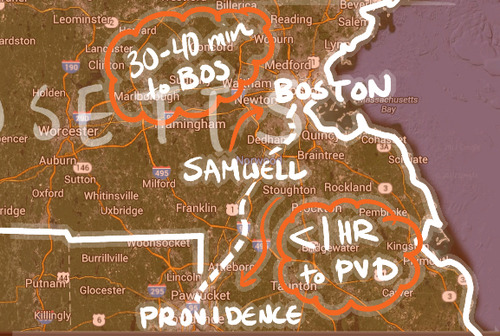