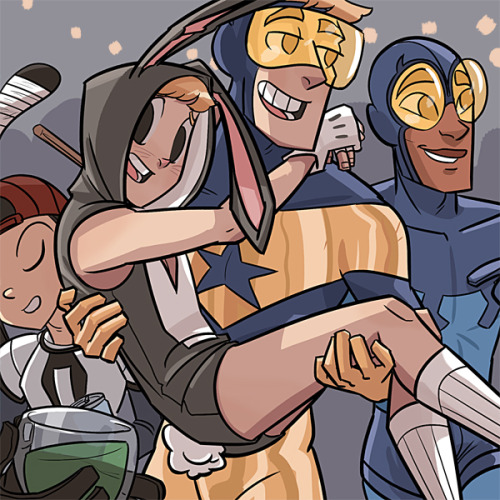 Johnson: There’s an infinite number of things going on here. 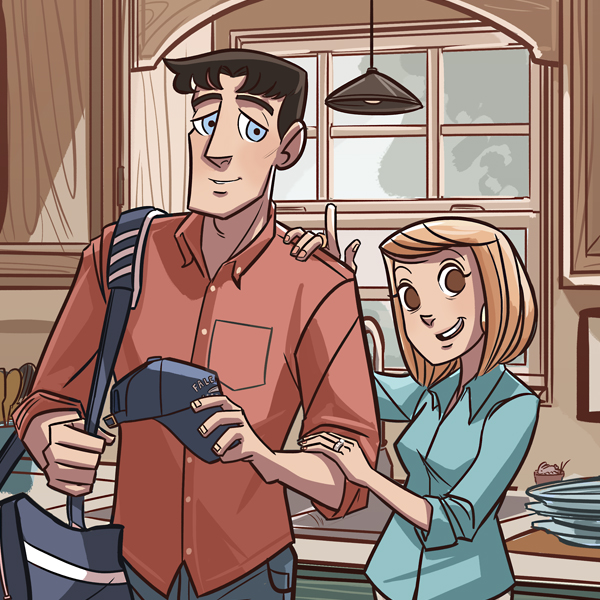 “Jack, you want one on your camera with Dicky?” 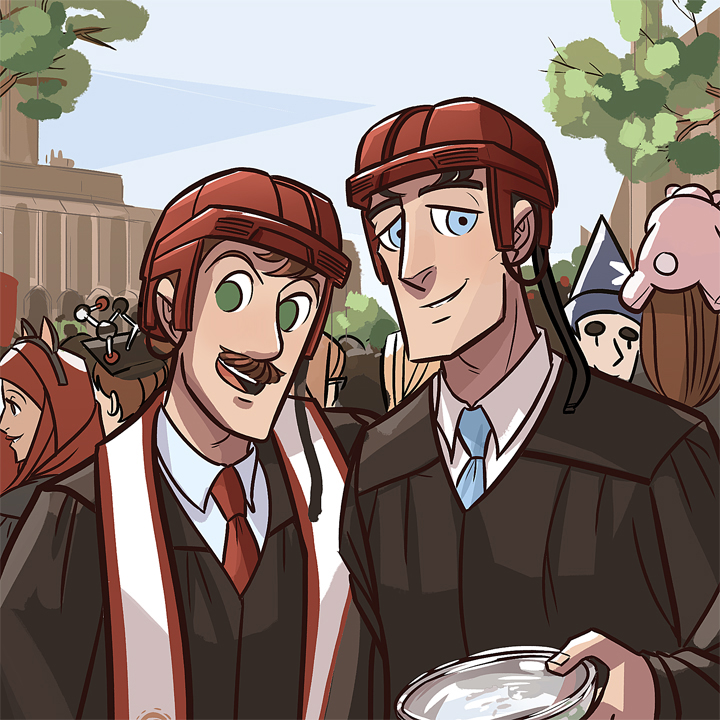 “Well then! ’The Matthew Earl Rupert Award is given to the senior man who during his time at Samwell has exhibited outstanding character on and off the play field.’ And he also gets this nifty booooowl.” [x] 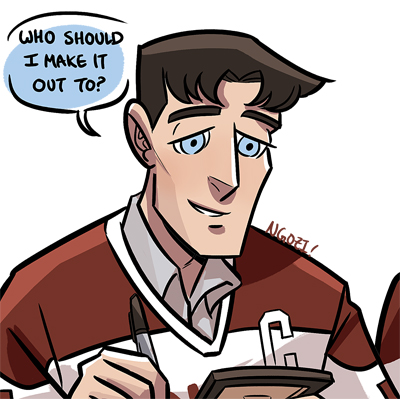 Jack during his last Samwell hockey fan appreciation night. The entire team sits at foldout tables in the atrium of Faber, and the boys sign jerseys and posters and take pictures with fans. And then the Samwell Daily shows up and Jack gives his standard annual sound bite: “Events like these are a great way to give back to the fans. And it’s fun to see everyone come out before the season starts. It’s really motivating.”

(I did this today during a small 1-day convention we had for class. Nothing makes me happier than getting commissioned to draw Check, Please!) 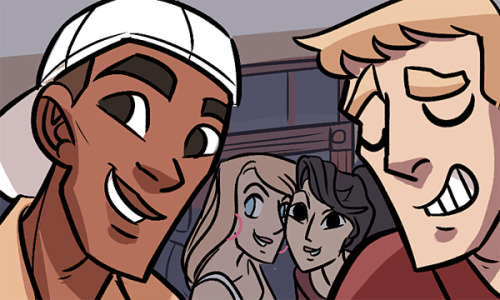 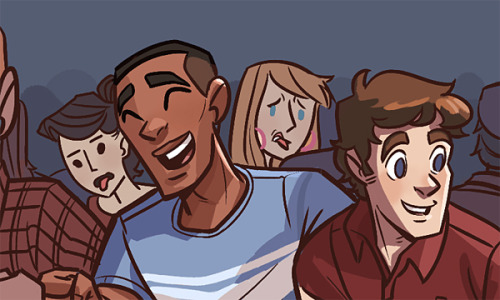 “Yo, Holtzy, do you know the chicks who’re in all our kegster pics?”

“Ollie looks good in that one.” 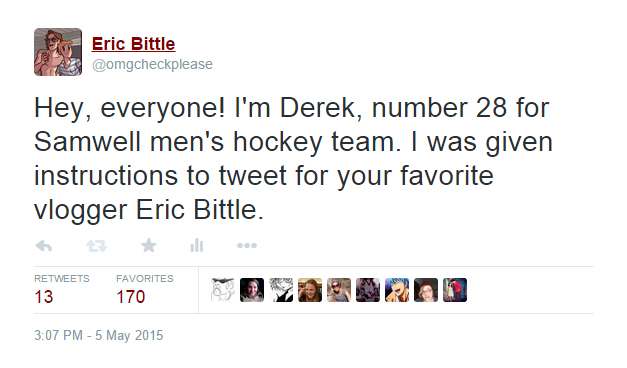 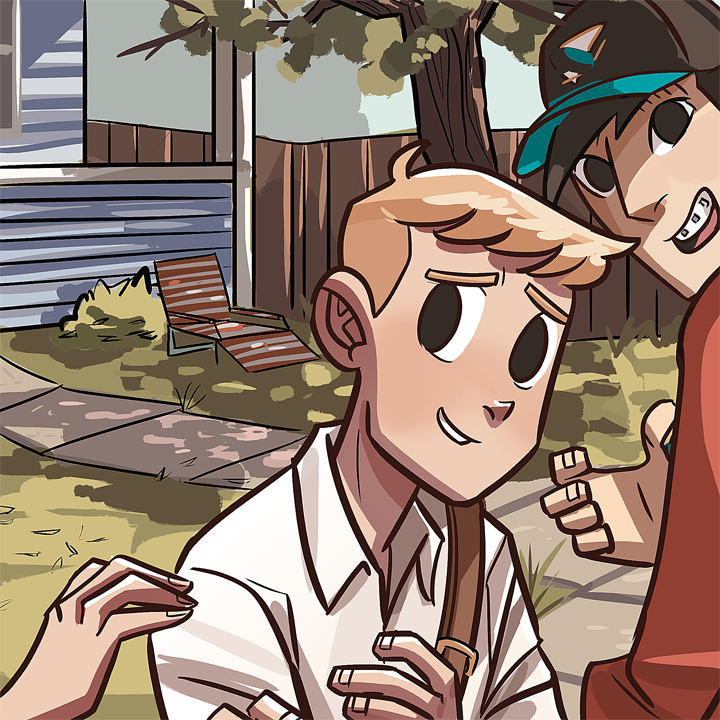 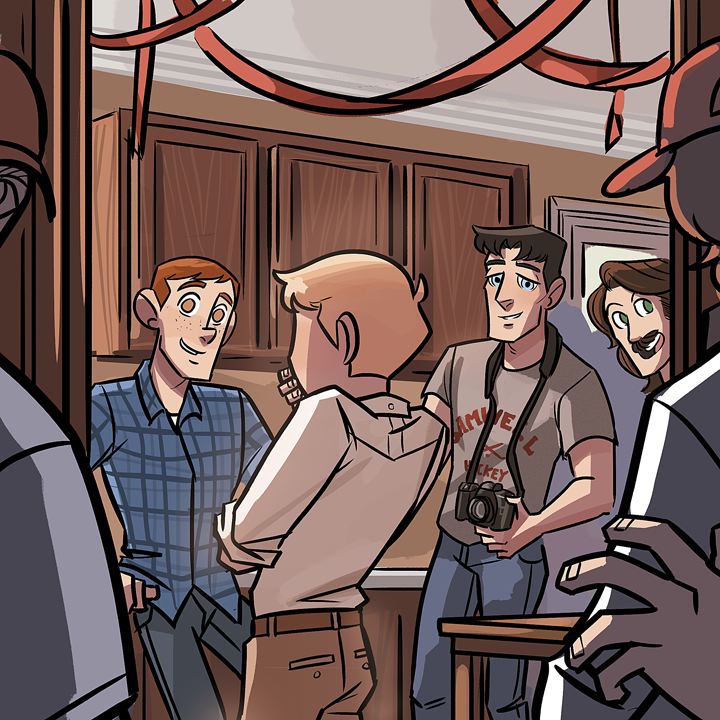 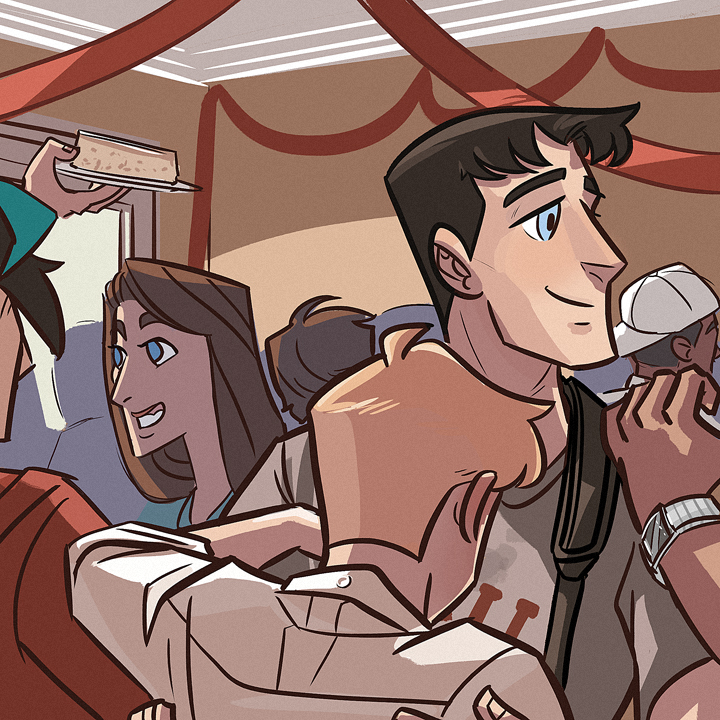 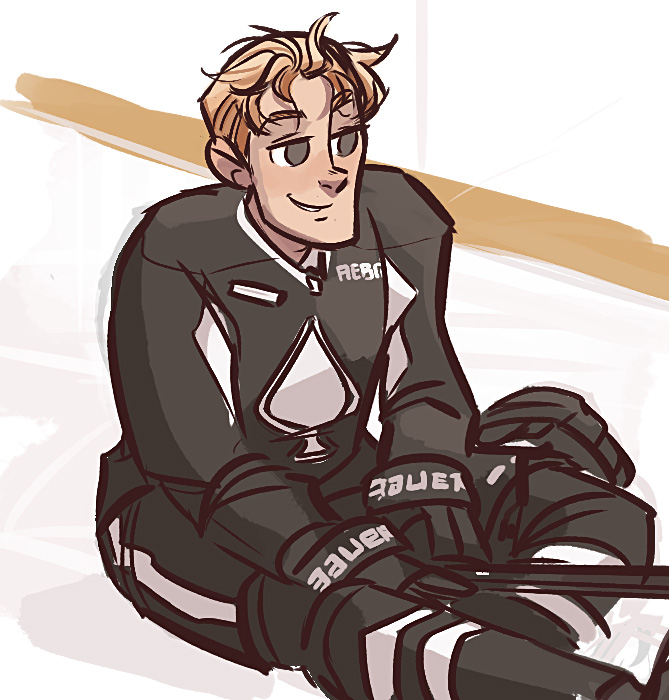 “Yup. Oh yeah. Not at all professional. The media’s around.” 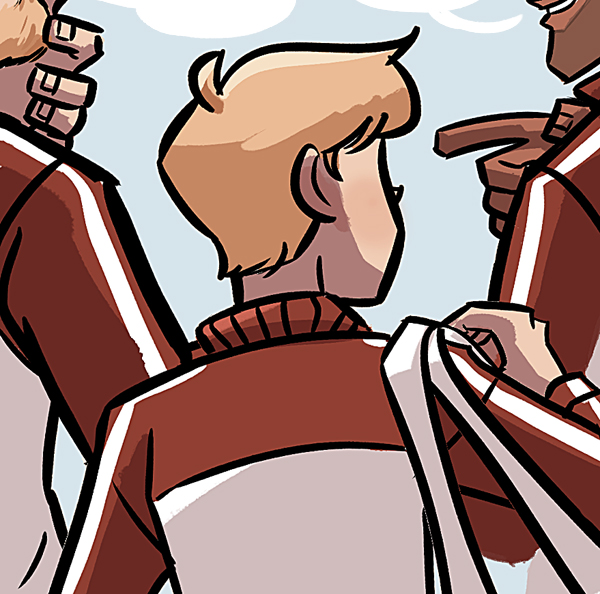 “Not growing a beard for the team, eh, Bittle?”

“If I could I would, captain. Losing my shaved sides seemed like the least traumatic option.”

"Let’s hope you don’t get them back until April.“

On very rare and very special occasions, Eric R. Bittle will get live-tweety and photo-happy and particularly social media-y. Yesterday was one of those days. 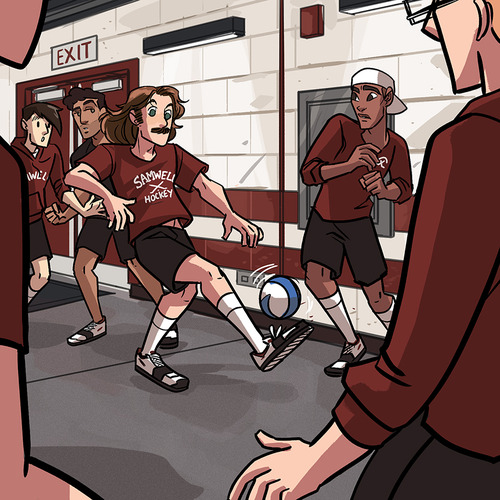 “Seconds before Ransom’s face "got sniped” #RIP" Because Shitty played soccer for two years in middle school and is slightly delusional about his “mad juggling skills”. Everyone on the team has gotten their shit rocked by a soccer ball at least once.

Dex asked Jack why he wasn’t playing soccer and Jack said “Shitty always manages to hit me in the face before our first game. It’s happened for three years. Not this time.”

BUT BEFORE THAT Chowder passed out on the Haus’s couch while checking his phone or something and Bitty thought it was okay to photograph this in a maternal/creepy way:

Rans: DUDE the last time I slept on that couch I got a rash. Chowder: OH NO I FEEL ITCHY

Do you love how gullible Chowder is? I love how gullible Chowder is. And how he is constantly on edge and ready to freak out about everything. This is why he’s such a good goalie. “Is that puck coming towards me is that puck coming towards me oh no maybe it is wait it definitely is oh no oh no oh no okay okay okay it didn’t but it could’ve that was close hey get out of my crease WHAT WAS THAT”

Lardo isn’t talkative so whatever she says is always pretty important. She probably put a hand on Bitty’s shoulder and said “you’ll kill it” and Bitty was like, “wait I have strength now.”

And then of course they wrecked shit:

[insert collage of marriage proposal posters that Wellies held up in the stands here (“will that guy named Shitty marry me?”)]

And what do you do when you win your first game of your season? You have a kegster of course.

Jack proposed to be a cat for halloween (probably to make Bitty + Shitty + Lardo shutup and to save himself from a worser fate). But you know? No one really thought he’d follow through with it. Even if Lardo and Bitty gave him little cat ears the day before and EVEN IF Shitty said “YOU HAVEN’T DONE ANYTHING FOR HALLOWEEN FOR THE LAST THREE YEARS THIS IS YOUR LAST SAMWELL HALLOWEEN–how are we even friends?”

Shitty’s 100% sure Jack’s only in costume because he scored twice. But I dunno!!

Cue Shitty hugging Jack for the rest of the night and wailing “he’s a caaaaat. He’s a ca-a-a-at. I love this beautiful man so &!%@$^* muuuucchhE SCORED TWO GOALS.”

And when they get to that segment on college athlete costumes on College Sports Weekly Recap, they’ll say something like “It looks like Jack Zimmermann was so tired from his great game that evening that he didn’t really care what he was.” “Uhhh I think he’s a cat, Mike.” “He might be.”

ETA: QUICK. What do you think Jack’s reaction to seeing Bitty in a dress was GO. 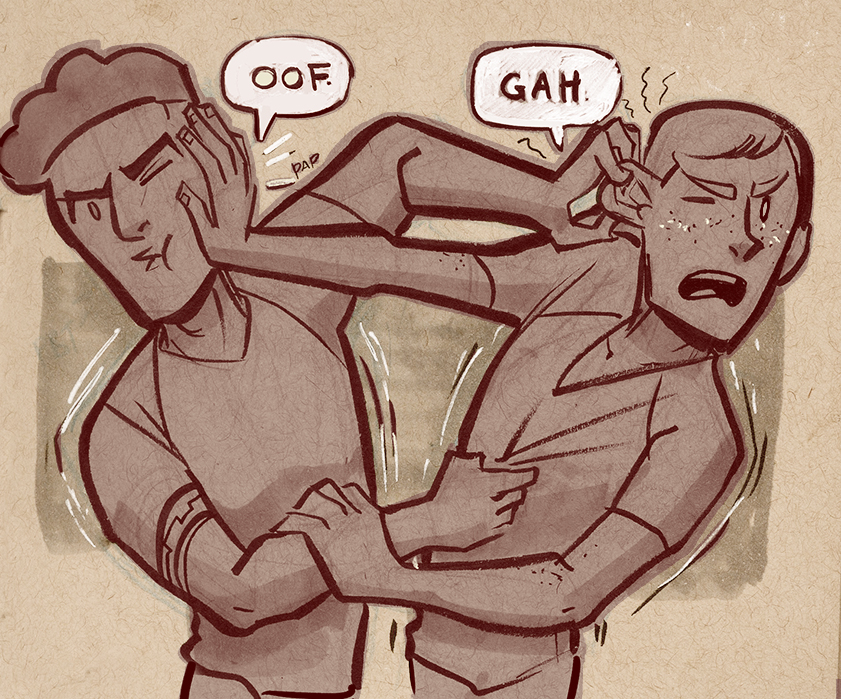 “I wasn’t like this when I was a frog. Is it a defensemen thing? Were you and Holster like that?”