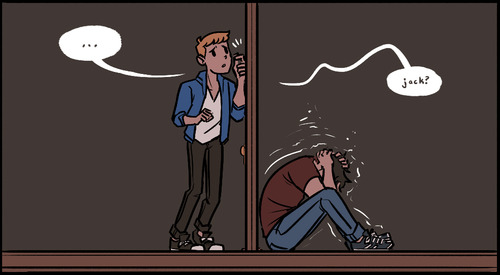 âœ“ I made a list of these a while ago:

- Kent “You May Not Know Who I Am, But You’ll Want A Selfie With Me” Parson

- Kent “Looks At Jack and Says Hah Do He Got Booty? Oh God He Has Too Much Booty Abort Abort” Parson

- Kent “Has Dreams About Jack Zimmermann, Which Are Bookmarks In A Detailed Catalog Of Ways To Make Jack Question His Self Worth” Parson

âœ“ So Parse *is* a dick? Okay, but was all the stuff Shitty said true, then? Were Jack’s previous reactions a response to the way Parse had treated him before? Or is Jack actually insecure and jealous? Does Parse know about Jack’s anxiety? Does Parse miss Jack? Does Jack miss Parse? Is there still something there? These are all good questions.

âœ“ Dear God, why do I even read these blog posts??? For the vague hintings of course!

âœ“ Kenny??????????????????? You know when it’s the last summer of your childhood and you’re just hanging with your bro and you’re smoothing out his cowlick and you fondly call him Kenny while trying not to think about how mercilessly cruel fate is lol you know bros being bros

Step One: Clean My Kitchen

OH BUT WAIT ETA! A day (ish) after #Epikegster and right before Jack goes home for Winter Break:

Okay, Jack & Shitty are fixing to head out. I’m going on a very dangerous mission. Wish me luck.

And now to wait… ðŸª

Text from Jack: i’m surprised your cookies got through customs Bittle (â—¡ â€¿ â—¡ ) He found them.

Eric “You May Never Want To Talk About What Happened, But I Can Wait, And I Want You Know That My Unconditional Love Comes Standard” Bittle

âœ“ Number of times I drew Parse at #EpiKegster in Parse I, II, and III: Three.