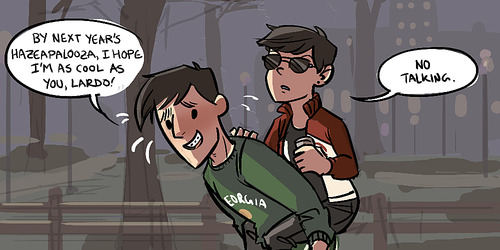 Hey, guys! Reblogging , retweeting, and sharing the comic is the best way to help Check, Please! grow. Thanks so much to all the people who are doing this already. Seriously–awesome write ups, primers and screaming in your friend’s face* † about this person named Eric Bittle keep the comic going. Thank you!

âœ“ Hazeapalooza: the Samwell Men’s Hockey Initiation Evening. It begins at midnight, with kidnapping the freshmen while they’re in various states of consciousness and undress.

- With a black sack over the freshman’s head, Ransom and Holster dragged a kicking and screaming Will Poindexter from a Samwell library while winking at the security guard because (a) she was being so cool about this, and (b) Ransom thought she was kinda cute and do you have a shift at the ice rink you look so familiar and hey what do you know i’m on the hockey team–JUSTIN LET’S GO.

- Derek Nurse woke up to a loud banging and then upon opening the door to his freshmen suite, saw his former Andover teammate, Shitty, in aviators, eye-black and not much else. Distracted and not quite expecting for anyone to see him with his hair like this, he did not notice Larissa Duan behind Shitty, with a black sack in her hands and ready to pounce.

- Chris Chow heard Jack Zimmermann and Eric Bittles’s voices before actually seeing the upperclassmen, and stood outside his own single wondering (a) why Jack and Bitty were in his room, (b)how they had managed to get in so quickly while he was brushing his teeth, and © what they were arguing about because it sounded important. (“Leave the pie! This doesn’t make sense!” “First, excuse you. Second, you’re excused, because you’re clearly too blind to see that this is a situation that necessitates baked goods. OH, don’t you give me that look, Jack Zimmermann.” “I–okay. Whatever. Just shutup. We can’t let him hear us.” “Hi, Bitty! Is everything all right???” “Aw, Chowder, your jammies are so cute!” “I should’ve gone with Lardo.”) Bitty then asked Chowder to put the black sack they had brought with them over Chowder’s head, and said he couldn’t tell him why, and in the five minutes of confusion that ensued, Jack eventually sighed, dragged the sack from Bitty’s hands, pulled it over the shrieking goaltender’s head, and shoved everyone out the door.

- With all the freshmen rounded up, Jack elbowed Shitty and laughed about how he was so glad he never had to do any of this. Shitty stared for a very long time at his friend Jack Zimmermann before whispering, “you fucker. you beautiful fucker.”

âœ“ They seem to be mostly incompetent at hazing. In his senior thesis for the Women’s Gender and Sexuality Studies major, Shitty will in fact note that “when the strictly homosocial and masculine environment of the initiation ritual is even slightly subverted, homemade pies can appear.”

âœ“ Why is Jack covered in feathers? I legitimately do not know.

âœ“ In panel 4, what is Dex looking at? I’m pretty sure Dex is wondering who the hell all these random NPCs are, and what they’re doing at his initiation. Considering that there are only 9 named characters on the hockey team (11 if you include Ollie O'Meara and Pacer Wicks–>SOPHOMORES WHOSE FRIENDSHIP CONSISTS SOLELY OF FISTBUMPING. Trivia: how many times have they appeared in the comic? Get this question right and you’ll win–free procrastination!!!!), and that their team has about ~23-ish people, I’m sure Dex is wondering why he never talks to any one but Bitty’s crew.

âœ“ Using a carefully calibrated graph, show me how drunk everyone was:

âœ“Shitty’s hair is so long now. Countdown To Will Shitty Cut His Hair For Graduation So His Grandparents Will Attend Even Though They Wanted Him to Go to Harvard and are Wondering Why He Didn’t Major In Economics Like Every Other Knight Male Since 1959? OH! There WILL be talk of this errant Knight progeny all over the cape!

And because someone requested it, without words: 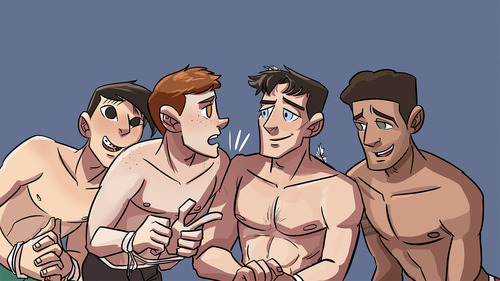 âœ“ TAGS. If you track tags, here are the tags I’ll be using for ALL FUTURE UPDATES. “#omgcp extras” for ask-a-wellie responses and various illustrations and “omgcp update” for main comic updates. There’s no tumblr police obviously, so if other people use those tags, you can just stare at them and politely think “shhhhh stop”.

âœ“ I’ll make a whole post devoted to this BUT HAVE YOU BEEN KEEPING UP WITH ‘SWAWESOME SANTA? That is, the Check, Please! fanworks secret santa exchange run by the indefatigable mamaliza and northerndownpour. IF YOU AREN’T, YOU ARE MISSING OUT. Heaps upon heaps of words have been written about Check, Please! characters and a number of drawings have been drawn by people other than me! Check it out!

âœ“ If you ordered a Huddle! zine, I’ll be shipping them out by Monday! Will I make more? Yes, but be very very patient! (I…kinda have to…draw this comic as well…)