What are Samwell's official colors? 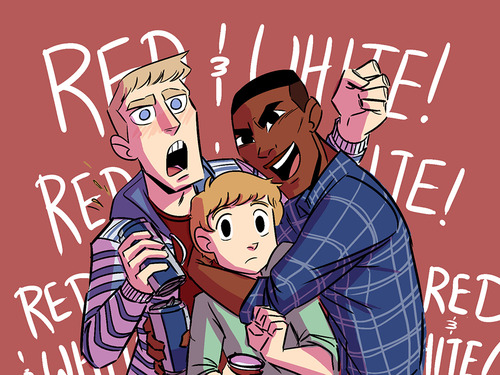 (Well. More of a dark red or crimson. But red is easier to chant after a few kegsters.) 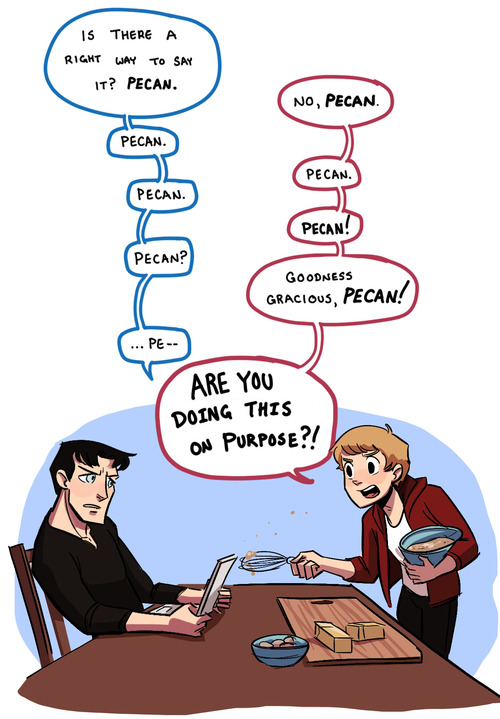 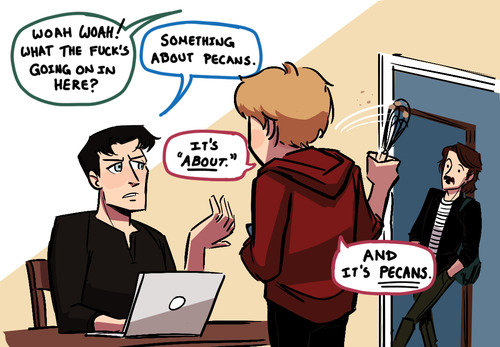 Bitty raised an eyebrow at Jack. “All I know is that I’m making a pecan pie. Not a pecan pie. Whatever that is.”

What are the guys' hobbies outside of hockey and partying? (especially Jack, since he doesn't seem to party, understandably) 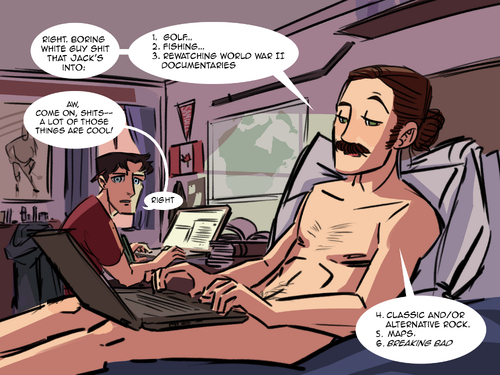 “Also didn’t we agree you weren’t supposed to be on my bed like that.”

“And yet you do nothing.”

how much does George Parros look like an adult version of Shitty?

Holster squints at the image Ransom pulls up on his laptop. “Eeeeeeh, Imma go with like a 6? Outta 10? I mean, there’s the mustache and the flow, but you’re missing like basic similarities in facial bone structure there.”

Holster looks back at Shitty, who’s reclined in Ransom’s bed because of the Never-Again-Shitty-With-No-Pants-In-Holster’s-Bed Act of September 2013.

Shitty frowns at his phone. “If we’re only doing a neck-up assessment, well, sure, then maybe like a 6. But if we’re fucking doing a whole body comparison, like a fucking 2. What’s Parros, like, 6-foot-3? 6-foot-4? And he’s a huge fucker. I’m like, 5-foot-fucking-10, so I dunno how much I look like the bro other than flow-wise and ‘stache-wise.”

“Bro, those are your defining characteristics,” says Ransom.

Shitty bolts up in bed. “Fuck you, Rans. My eyes have been described as shimmering and radiant.”

Ransom spins around in the swivel chair and snaps his fingers at Holster. “Oh dude, you know who Shitty kinda reminds me of? That one guy from that movie. With the–where they’re all on heroin and they’re Irish? It has Obi-Wan Kenobi?”

“Robert Carlyle in Trainspotting,” says Holster automatically, snapping his fingers back. “And when Shits came back from break and got his flow chopped off, you said he looked like–”

Shitty throws his hands in the air. “The fuck! You guys are just naming white guys with mustaches!”

Holster shrugs. “We’ve never seen you without a mustache–”

“Aaaand I’m out,” says Shitty before rolling off of Ransom’s bed and hopping to the attic floor with a thunk. “I’ve been in conversations like these a THOUSAND times and they always go in the same direction.” Shitty stops at the stairs and points at both of them. “I’m not. Shaving. The 'Stache.”

(The seriousness of the moment is undercut by the fact that Shitty is wearing nothing but Wonder Woman underwear.)

And Shitty leaves, stomping down the attic stairs.

“When the fuck did you see Trainspotting?”

Holster smiles at Ransom, looking genuinely touched. “You watched those?”

“You’re such a douchebag.”

What are Shitty's parents like? We know his mom made him read Toni Morrison.... 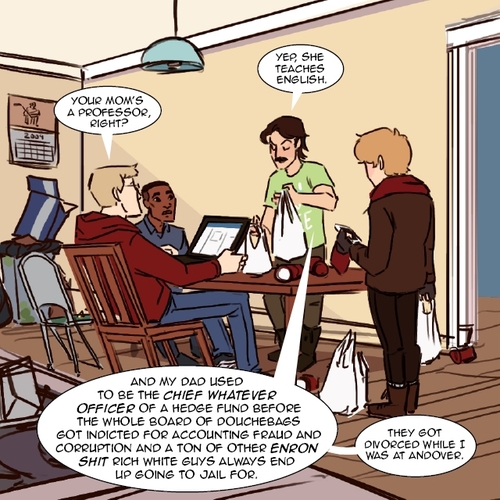 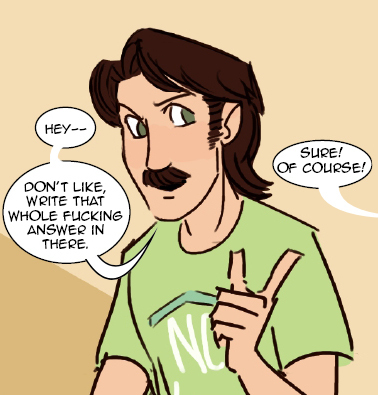 What did shitty want to triple major in? 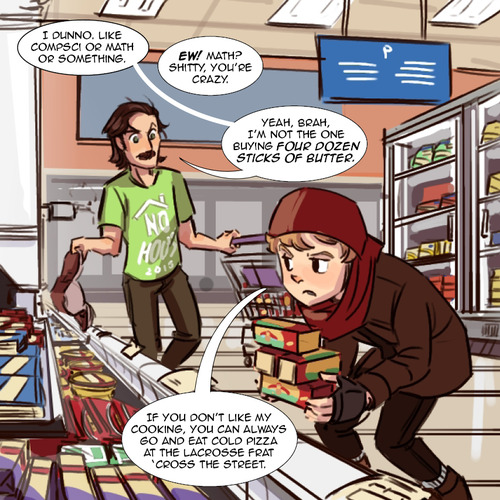 This one is for Shitty ('sup?), but what exactly made you want to study Women's Gender and Sexuality, if I'm remembering that correctly? Just thought that was interesting. Also, I like the 'stache. A+ on that, eh. 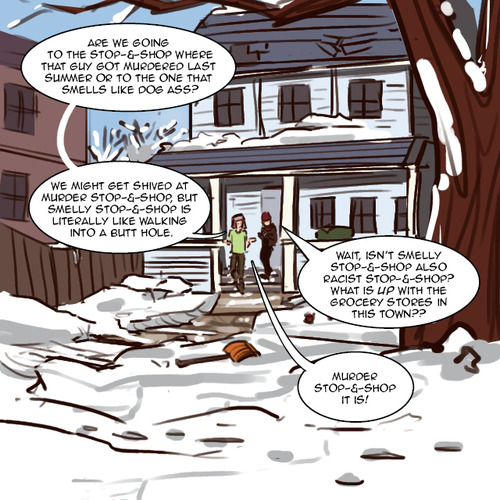 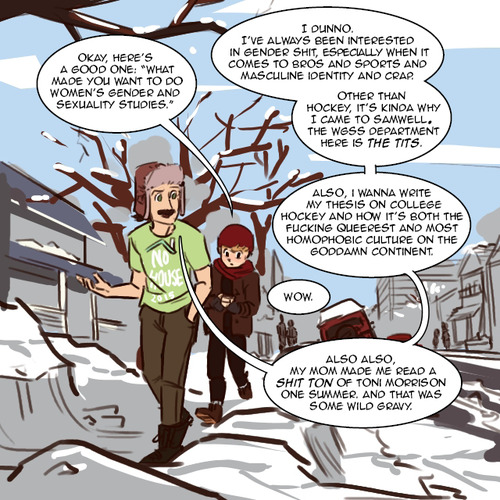 Will the guys ever find Bitty's video blog? 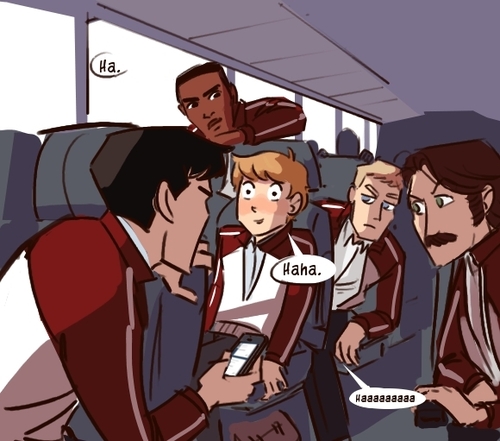 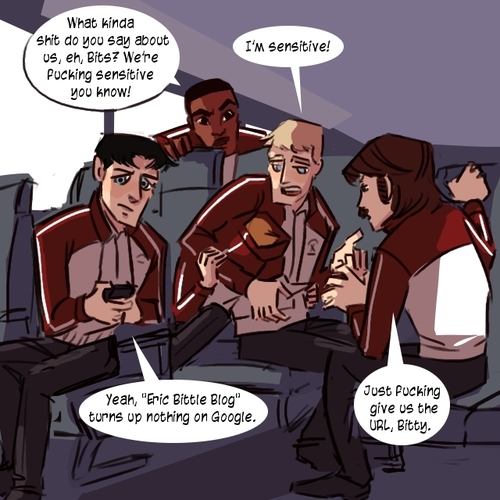 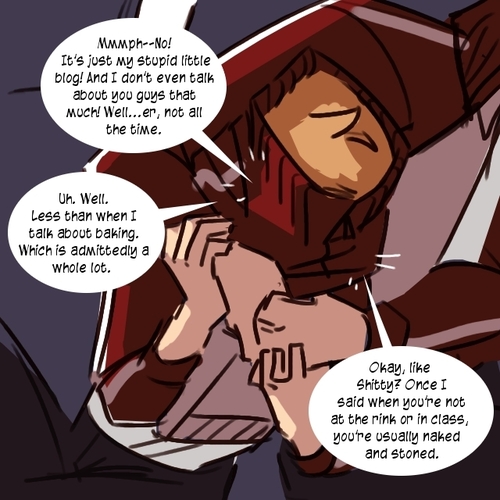 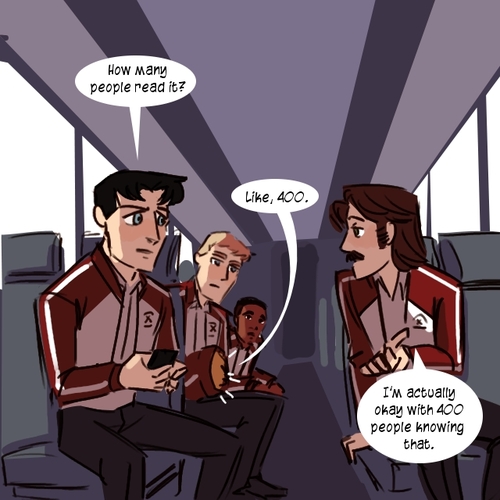 Do you have any Minnesotans or Midwesterners on your team?

yeah, i spent most of my life in minneapolis but i was born in new york. so does that make me Midwestern? bro, I dunno, good question!!! one could say that i’ve fully adopted Midwestern ideals and mannerisms so therefore i’m midwestern, but yeah, like, I dunno, since some of these notions are universal—where does Midwesterness begin and where does it stop? by geographical borders or the borders of our mental states? the Applachians or our attitudes? idek

plus, even if my character was born and raised in like, Northfield, what would that mean to you? would that allow you to more fully project a connection onto this set of hockey bros who don’t exist? would you feel more connected to me? would you know me? like seriously tho—epistemologically?

if it comforts you on an abstract level—yes i’m midwestern.

but yeah just stuff I think about in the crease. :-)