- If you have questions, comments, squees or concerns, this is where we can connect through the Information Super Highway. (Ask!!!) Also there are Disqus comment apps under every post. I’d love to start a thread. ._.???

- The US News & World Report doesn’t actually have a list of LGBTQ-friendly campuses, but the Princeton Review does. So there you go!

- ETA: Oh yeah, The Closet Story is a direct reference to a webcomic I had in college (I believe it started the summer of 2011) that…uh. Stopped suddenly. You can read the couple-or-so pages I made at this sad, sad, tumblr.

- ETA2: Blegh, I fixed Panel 3–Ransom’s supposed to be saying the first line there.

Me and backgrounds have a love hate relationship. I hate that I love to draw them because they take a stupid long time–maybe 60% of all comic making time. And while I know nothing about architecture, drawing Samwell’s Lake Quad was 1-part punch me-in-the-face, 2-parts a complete blasty-blast. Here’s some of those panels without speech bubbles: 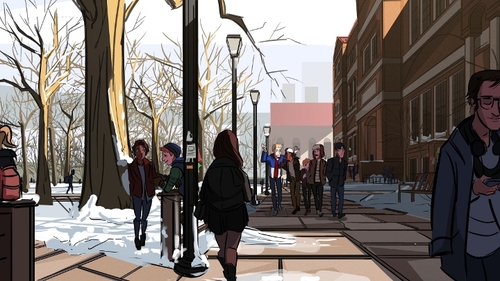 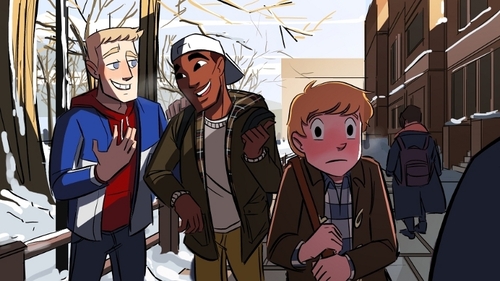 The Boys have style! Or something approaching it!

- Bitty’s Bitty, so he wears whatever, as long as it’s coordinated, fits, and is obvi totes mcgotes ‘swawesome 'dorbs. TOTES MCGOTES.

- Shitty tends to look like he’s about to play hacky sack. Or like he’s late to band rehearsal in his friend’s dad’s garage. That is, when Shitty is actually wearing clothes.

- Ransom dresses like the horrible preppy frat bro he is. The guy owns salmon shorts. Holster has thrown them out the attic window many times. Almost as many times as Ransom has tried to get Holster to wear Sperrys.

- Holster’s attire is based on that of one my suitemates from senior year of college. This guy was from Portland, Oregon, played baseball and basketball in high school, and owned maybe three pairs of shoes. (Becuase, practical!) Actually, a lot of Holster is based on my old roomie. Huh. Holster’s general approach to fashion is “What?” or “Huh?” or “Ransom, I will throw those fucking pants out the fucking window, I swear to God.”

- Jack consistently dresses like he’s about to rob a Burger King.

And for those diehard people who care about timelines and stuff, Comic 13 (and the next one actually) take place a week before finals. GAH, so behinddd.