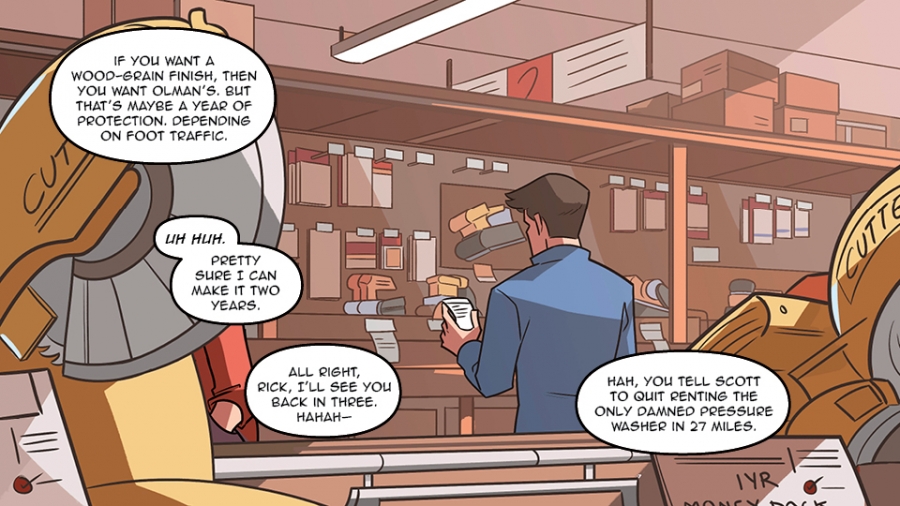 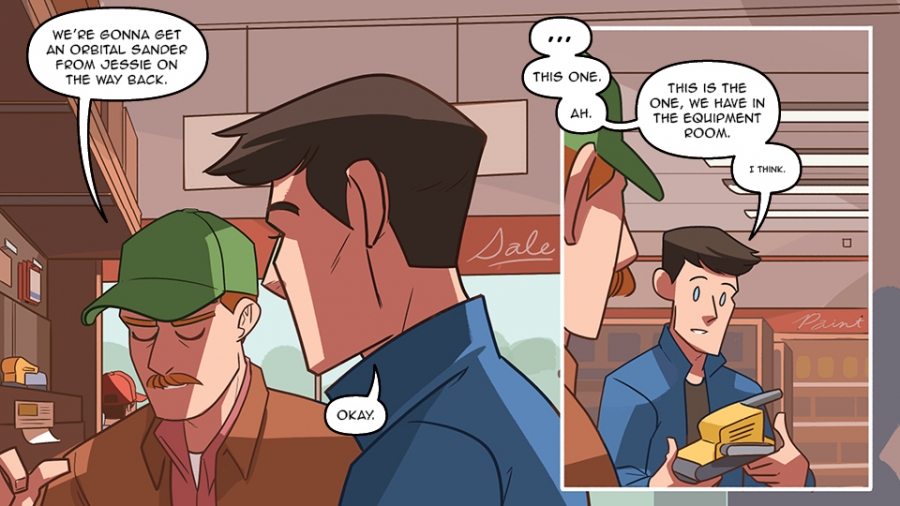 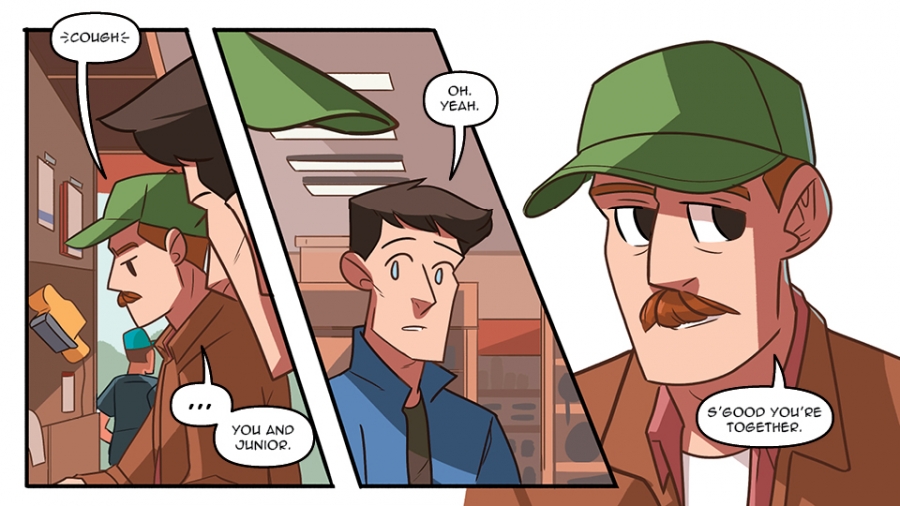 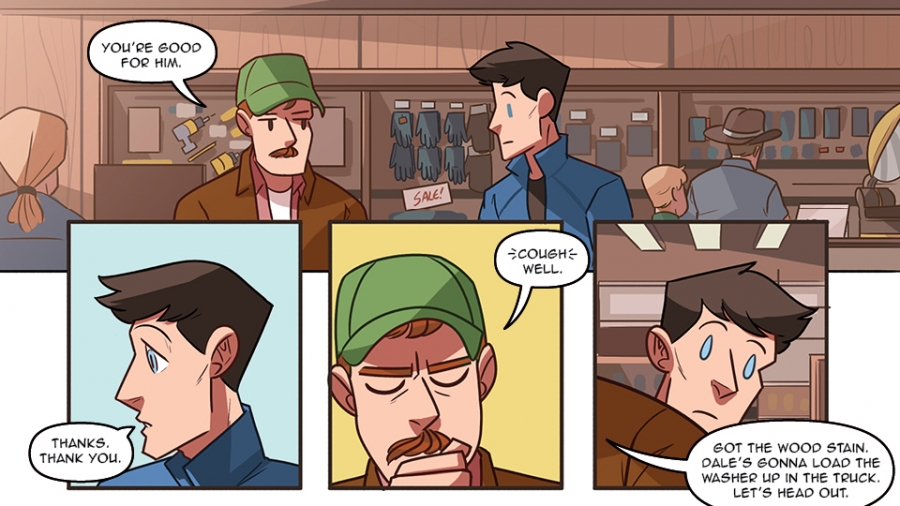 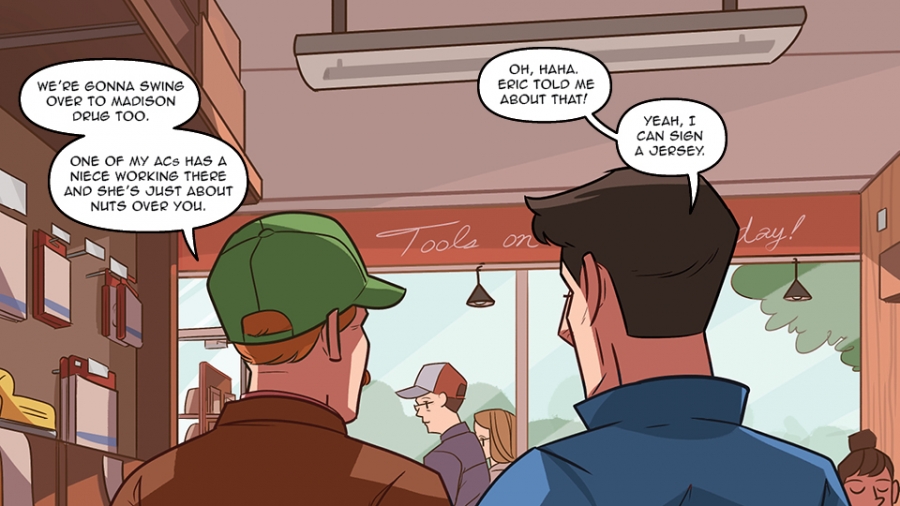 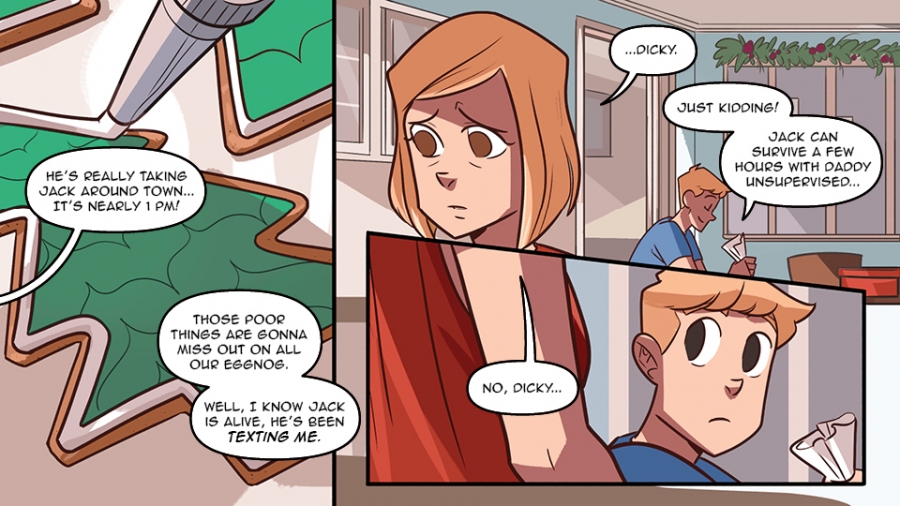 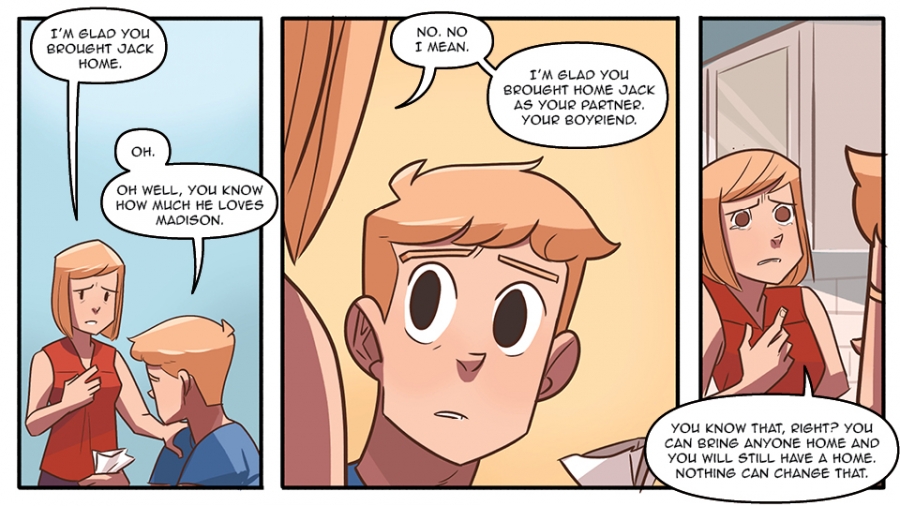 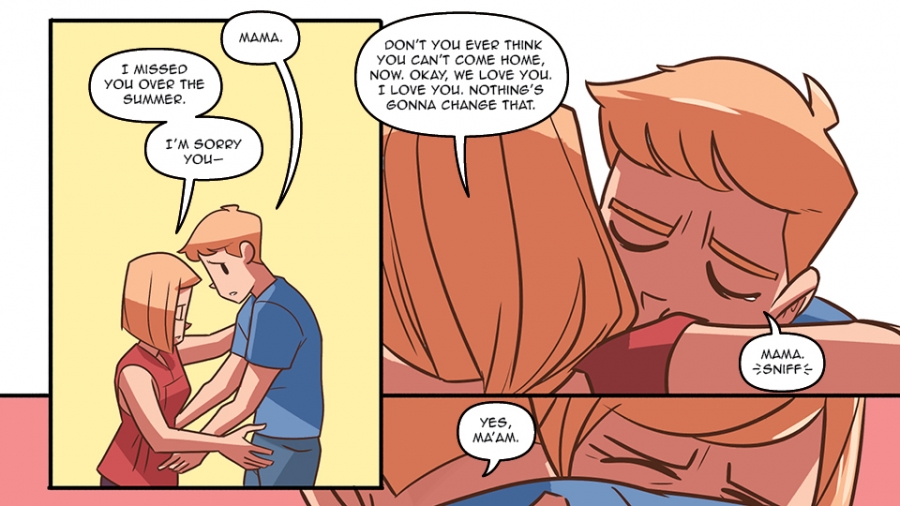 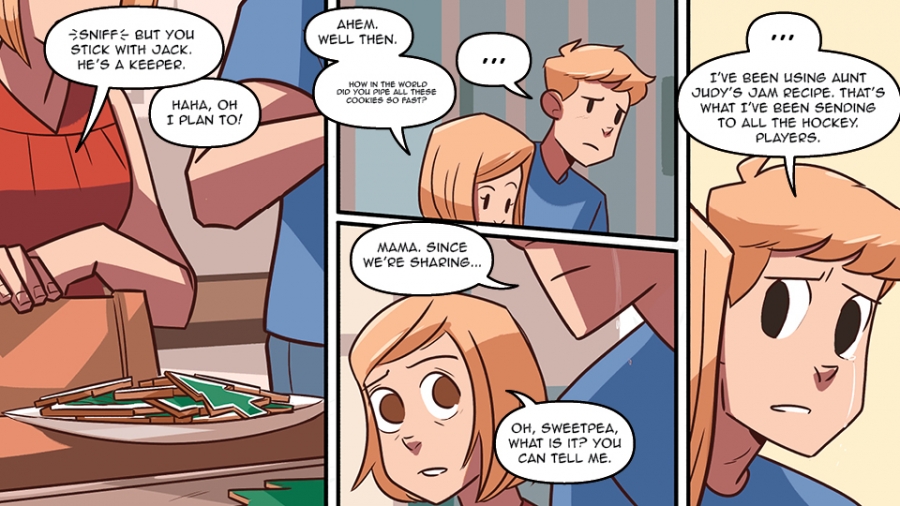 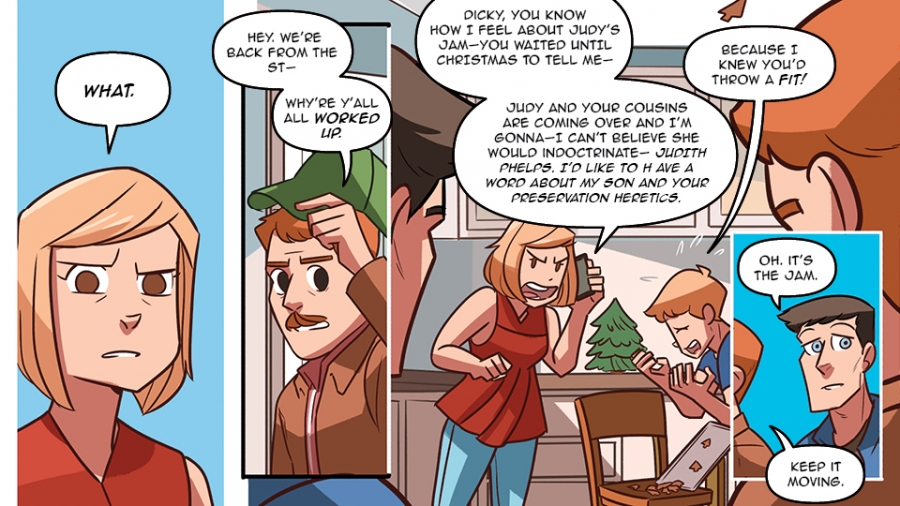 ? THIS IS MY JAM!! Oh, is it? Bitty doesn’t need his parents’ acceptance, but he wants it, and because this is Check, Please!, there is a warm broiling conflict (not like, scorching or skin-burning boiling conflict) until Bitty finally gets what he wants. That’s, like, how this story kinda goes. Bitty gets things. If that’s not YOUR jam, then fair enough. Sometimes things aren’t your jam. Examples of things that MIGHT NOT ALSO be your jam:

? Will we ever get a full explanation of this Jam Stuff? I can’t even talk about it.

? I thought Coach was gonna say something like “If you hurt my child, I’ll hurt YOU” or “Don’t go breaking juniors heart now…or else.” Lol, no. Coach is still adjusting to all this Jack stuff but he thinks it’s good that Junior is hanging out with the guy. Jack’s pretty decent. Hard worker. He’s a good man. Weird how all this gay stuff has made Junior act more assertive and confident all of a sudden.

Guess Jack’s good for him.

?Up Next: Christmas In Madison III and the end of Year Four Fall Semester. We’re moving on to the last semester of Check, Please!

? CHIRPBOOK KICKSTARTER is next month.

The Chirpbook collects Bitty’s best tweets (including Year Four tweets) and adds in brand new selfies, comics, and illustrations. Follow me on Twitter and Instagram to know when that goes down!

? Day & Weekes.  If you’re at all interested in my future projects, EPISODE ONE OF DAY & WEEKES is available to listen to for FREE on my Patreon. I’m learning a ton about audio narratives, and I’m excited to improve!!

Day & Weekes follows the adventures of a surgeon in the royal navy, who is investigating the supernatural and a royal navy ship captain who discovers he has supernatural powers.

And that’s it for me. Thank you, as always, for reading!! 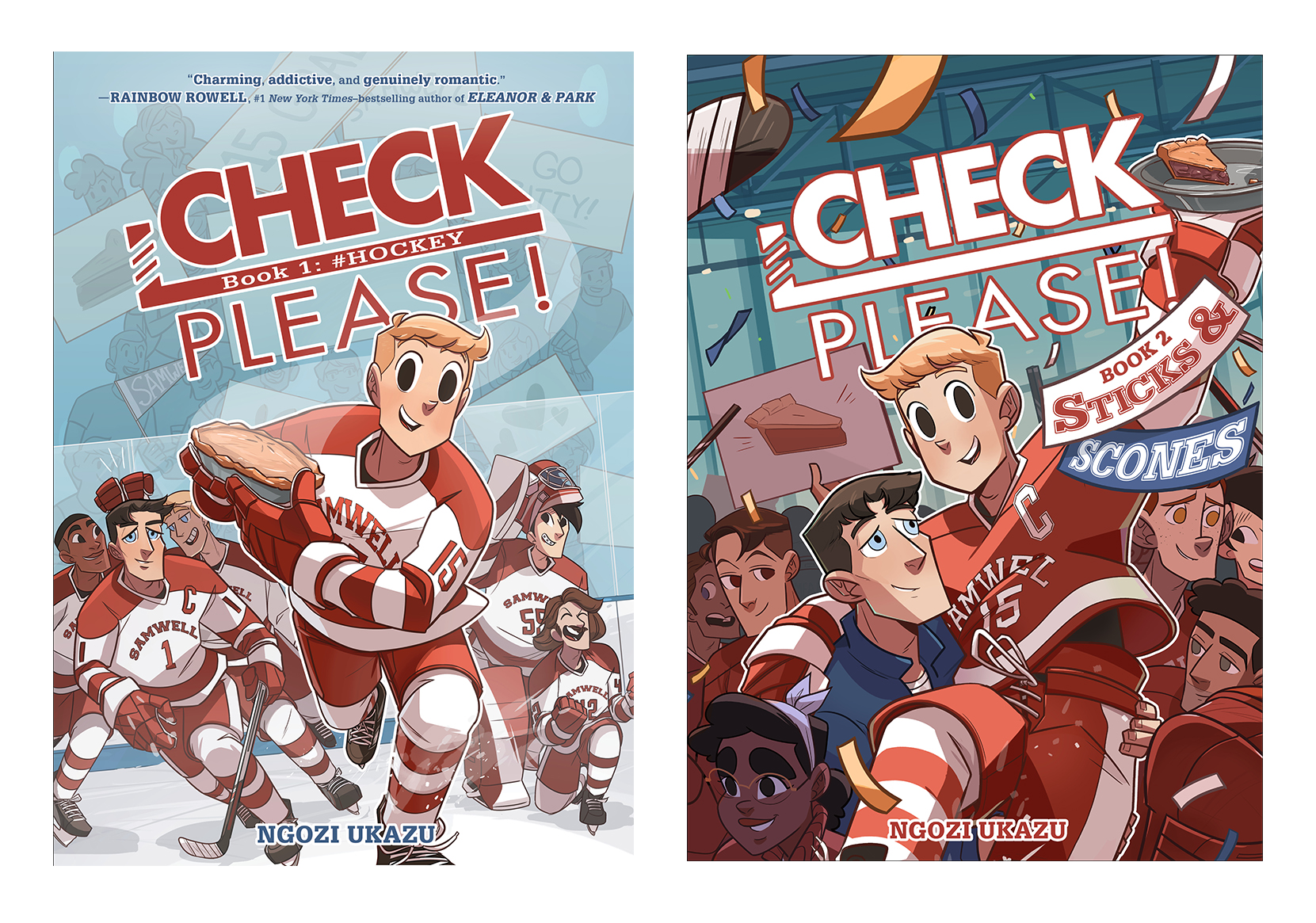